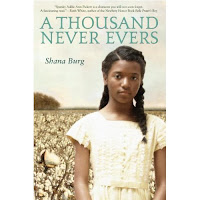 It's the summer of 1963, and all is not well. Medgar Evans has just been shot, four little girls have been firebombed while at Sunday School, and who knows what else is going on that is not making the news.

Addie Ann Pickett lives in Kuckachoo Mississippi with her mama, her Uncle Bump (on account of his muscles), and her brother Elias. Her biggest concerns of the summer are working with her Uncle at Old Man Adams' place, trying to convince her best friend Delilah that jumping double dutch isn't baby stuff, and worrying about
7th grade next year with Mrs. Jacks over at Country Colored (West Thunder Creek Junior High School, if you please!)

Things start changing when Old Man Adams up and dies. No one is more surprised than Addie Ann when she, her Uncle and Elmira the cook, are summoned up to the house for the reading of the will. Mr. Adams left a little something for each of them. Elmira gets his dutch oven, Addie Ann gets the television (that she used to secretly watch sometimes), and Uncle Bump gets a beautiful gold pocket watch. Everyone there is most interested in what will become of the house and grounds. After all, Old Man Adams has the best garden around.

Imagine the looks on the sheriff's and mayor's faces when the lawyer announces that the garden is to be a shared community garden for whites and colored folks alike! But when most people in power are racist from their toes on up, this seems like a piece of Old Man Adams will that won't be honoured.

Then something even worse happens. One day when Addie Ann's brother brings her to the general store, two bully white boys take her cat from her. All because she raised her eyes, and doesn't know her place. One boy is about to drop kick poor Flapjack when Elias comes to the rescue, lobs a honeypot at the boy's head, knocks him out and breaks his leg. Elias takes off swimming for his life in the Bayou. Addie Ann knows the sheriff and his hounds, along with the Klan will be after Elias.

What follows is Addie Ann's struggle to get through. Her struggle to come to grips with what has happened to her family. And her realization that now is her time. The reverend always said that she would know when her time to the movement would come. When the hounds come for her Uncle, she knows it's her time, and Addie Ann rises to the occasion.

Brilliantly written, A Thousand Never Evers should have a place in every public and school library. Addie Ann and her family come alive off the page, as does the town of Kuckachoo itself. Equally heartbreaking and inspiring, Shana Burg has taken her own family's calling to the civil rights movement and made it into a work of art.

This is one of the rare times that I put a recommendation here and at Booktopia. I do think that this book really does span from tween to young adult. The issues that arise can be discussed in various manners, and the summer of 1963 is one that we all need to know and think about!
Posted by Stacy Dillon at 6:06 AM 3 comments: 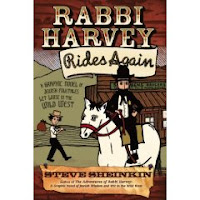 If you love graphic novels and you review them on top of it, you end up reading an awful lot of 'em. You wade through plenty of mediocre ones and you start to think that everyone knows about the really stand-out pieces as soon as they hit the shelves. Not so, I'm here to tell you. There are hidden gems, even in this day and age when graphic novels seem to be finally getting the attention they've long deserved. Case in point: Rabbi Harvey Rides Again, sequel to the equally wonderful The Adventures of Rabbi Harvey, both by Steve Sheinkin. The story of the humble and seldom ruffled Rabbi Harvey, who finds himself sheriff of a small Old West town filled with miners, outlaws and devious bubbes, the good rabbi can hardly employ the classic six-shooter solution and so brings to bear the wisdom of ancient Jewish folklore. Sound like it might be a hard sell for your hesitant tween? Let me assure you, the humor is so sly, the characters so engaging, the indiosynchratic art so charming, readers will find that the wisdom has somehow or other snuck by without an instant of discomfort. In point of fact, the stories are so well constructed that the solutions to the various townsfolks' problems (for instance, just how do you prosecute the wind for stealing someone's last piece of bread, anyway?) feel much more like an extremely satisfying punchline than any kind of a lesson.

For every Arrival or Hugo Cabret you know there's a Rabbi Harvey waiting to be discovered. Keep an eye out, a little Old West Rabbi humor never hurt anyone. A little wisdom never hurt anyone either, for the matter of that.
Posted by Stacy Dillon at 7:59 PM No comments:

The Robe of Skulls

Gracie Gillypot's life is terrible. Living with her stepfather, Mange Undershaft and his daughter Foyce, is close to unbearable. Her existence is very Cinderella. After Mange locks her down in the cellar again for being cheerful while making water soup to feed the family, a bat swoops in and starts talking to her. He takes in Gracie's situation, and promises to return with something to eat, and an offer to improve her situation. When Gracie pours the bag that the bat gives her into the water soup something amazing happens. All of a sudden the kitchen is filled with the smell of rich and meaty stew. Chunks of beef and potato and onion appear. Mange eats greedily, and although Foyce is a bit cautious, she too partakes in this rare meal. Trueheart Stew, it's called. A powerful sleeping potion for some, and a delicious meal for the true of heart. Can you imagine who does not fall asleep?

Soon Gracie and her bat companion Marlon are on a quest. Mange and Foyce aren't the only baddies afoot. The sorceress Lady Lamorna, and her sidekick troll Grubble, are on the hunt for gold with which to pay the Ancient Crones who are constructing her new gown...her robe of skulls, which she ordered before realizing that her treasure chest was empty. She is off to turn princes into frogs for ransom. What she doesn't count on is the beautiful and sneaky Foyce hijacking her plans.

Vivian French has written an adventurous story chock full of action, magic, evil step-sisters, and even a bit of romance. The illustrations by Ross Collins compliment the story perfectly, and lend to the mood considerably.

This is a perfect book for the fans of the fractured fairytale, Roald Dahl, or tweens just beginning to indulge in the spooky! On the shelves in July!
Posted by Stacy Dillon at 4:30 PM No comments: 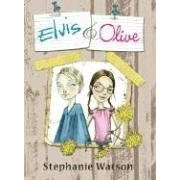 It's the beginning of summer vacation and Natalie Wallis is already bored. She decides to give herself an assignment to pass the time. Her task is to clock how fast that she can ride around her block. It doesn't hurt that riding around the block means passing Steven Redding's house. Natalie thinks that Steven is the cutest, sweetest boy in the whole school and she has been secretly in love with him for three years now. But it's not Steven who Natalie runs into.

Instead, there is a small, skinny boy standing in Natalie's path. "I'm gonna tell you a secret," the boy says.

Well, Natalie comes to find out that this boy isn't a boy after all, but a girl named Annie. Annie has lots of secrets, and she wants to find out more. Annie and Natalie (code names Elvis and Olive) start their secret club that day. Their task is to find out the secrets of all of the people in their neighbourhood. Natalie assures Annie that the block is boring, but Annie knows that the most seemingly normal folks, tend to have a secret or two ripe for spying.

Natalie likes being around Annie even though she knows that Annie is a liar. Annie is not like the other girls in her private school. She is brave and a little dangerous too. Before too long it becomes apparent that some things are secret for a reason, and that while spying is fun, being spied on is not.

Stephanie Watson has written a gem of a story about friendship, truth, family and trust. Annie is a character who is flawed all over the place, yet likable just the same. Readers get to watch Natalie become braver, which is always a fun thing to do! This is the kind of story, however, that gives me the after-school special feeling in my stomach...you know when you see something bad coming, and you are yelling at the character on the television not to do what you know they are going to do? Watson really does have you wanting it all to be okay.
Posted by Stacy Dillon at 1:12 PM 2 comments: