The Jumbies, by Tracey Baptiste 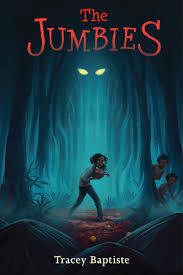 Corrine La Mer is totally at home on her island. She’s not afraid of the woods like most of the kids she knows, so when two village boys tie her late mother’s pendant to the leg of an agouti she simply follows her instincts and dashes into the woods after it. It is all she has of her mother and she needs to get it back.


But once she retrieves the pendant and is not concentrating on the chase, Corrine does start to feel some unease. Her skin prickles as she thinks about the creatures the villagers talk about inhabiting these woods...the jumbies.  Corrine thinks she sees some eyes behind a bush and she hightails it out of the woods straight into the arms of her Papa as he and the rest of the village makes their annual trek to the graveyard to pay respects to those who have passed.
On their way home, a woman stands in the shadows. Corrine’s Papa asks if she needed any help but she refuses.


This is both the end and the beginning.


It is the end of the simple life with the people living on the outside and the jumbies living in the woods. It is the beginning of Corrine’s coming of age. Not only has a jumbie followed her out of the woods, but this particular jumbie has Corrine and her Papa in her sights.


So begins the adventure that will test Corrine’s will.  Even though she has always been strong willed and independent, she must bend a little and learn to ask for help and depend on her friends.  She learns that things aren’t always as they seem, and that adults are very adept at keeping secrets.


One of the most interesting parts of the story is in the way that Baptiste weaves in a narrative about colonialism, and as Betsy Bird put it “us” and “them”. There are some very poignant moments filled with these big ideas that are handled with aplomb and never seem forced.


This book fills several voids for the audience. First, most of the retellings of folklore in novel format that I have read are European in source. The Caribbean setting is a stand out.  Also, this title fits perfectly into the just creepy enough and just scary enough for the audience.  The island is lushly painted with its’ port and marketplace and dense woods.  Corrine and her friends are off on their own most of the time, but the adults in their lives clearly care for and love them deeply. This gives readers the reassurance that things will hopefully come out okay.

I will be booktalking this one as soon as we go back to school!
Posted by Stacy Dillon at 4:03 PM No comments: