Heck: Where The Bad Kids Go 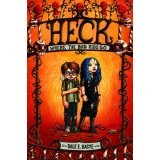 Check out this cover! How cute.

I was lucky enough to attend the Random House Summer Preview last week on Valentines Day. The folks over there put on a lovely luncheon, complete with candies, kisses, and glittery lips! But the real show-stoppers were the books!

Marlo and Milton are living in Gernerica, Kansas where Milton is your run of the mill kid, and Marlo is a bit of a hellion. She is bent on pulling off the greatest shoplifting extravaganza ever! Unknown to Milton, Marlo has pulled him into her plan. They are running through the mall trying to avoid security when resident trouble maker Damian pulls off his own stunt...blowing up the gigantic marshmallow bear statue in the centre of the mall.

All of a sudden, Milton and Marlo find themselves sliding for thousands of miles, watching the air change from white clouds, to ash grey, to sooty black until they land in an Olympic-sized kiddie pool filled with Ping-Pong balls and garbage! Where the heck are they?

This is the place where the bad kids are housed until they turn 18. A place filled with disgusting creatures, school, and bullies. Milton can understand why Marlo ended up here, but why him? Until unwittingly shoplifting some lip-gloss, Milton's record was flawless!

Now Milton is on a quest to get the heck out of Heck! Can he do it with a little help from some other kids gone wrong?

Dale E. Bayse has written a romp of a story filled with gross-out moments involving poop, brussel sprouts, and Barney. Lots of word play and hilarious situations arise. I do wonder, however, if today's kids will get the joke of Lizzie Borden teaching home-ec, or Nixon teaching ethics. Kids may just read over these details and enjoy the story.
Posted by Stacy Dillon at 9:02 AM 2 comments:

I love the camp story almost as much as the boarding school story, so imagine my delight when this gem of a graphic novel showed up at work.

Abby is the first girl to show up at camp. She cannot wait to see her friend Rose, who is a cabin assistant this year. Their age difference has never been an issue before, but now, things seem different. Add on the fact that Deni, the girl who claimed the bunk below Abby, does nothing but talk and complain all the time. After listening to Deni all day, Abby is worried that she will never get any sleep. But Deni doesn't talk all night ... she scratches! What is going on?

Before long, Deni goes home and Abby has a new bunk mate named Shasta. Shasta is cool and pretty and she actually likes all of the things that Abby does. The thing is, that none of Abby's other friends like Shasta. Abby is wondering...do they like her? Afterall, she and Shasta are kind of similar.

Hope Larson has penned a graphic novel that rings so true on themes of frienship, identity, first crushes, summertime freedom and the idea of loyalty. The black and white artwork perfectly compliments the story, and readers will be falling in love with Abby before they know it! Chiggers should be in the luggage of every girl heading off for camp this July!
Posted by Stacy Dillon at 11:05 AM 1 comment:

I am always on the look-out for a good immigration story. The topic is a big one in our curriculum. Imagine my delight upon having The Dragon's Child A Story of Angel Island, by Laurence and Kathleen Yep delivered by my fab colleague Jen.

A young boy, Gim Lew, is living with his family in his father's village in China. Father doesn't stay with them, however. He is a Guest of the Golden Mountain. In other words, he lives in America. He comes back periodically, brings money, and takes the sons away. Gim Lew first met his father two years ago, when he was seven years old. His father is a dragon, and the boy is nothing like him.

Gim Lew has a stutter and uses his left hand as well. He is just getting hit with the bamboo rod by his Uncle Jing, when word comes that his father has returned. His father is the most important man in the village, and as he usually brings gifts from San Fransisco, everyone is excited about his arrival. The New Year is just over, and most people could use the extra food that celebrations bring.

Gim Lew is shy around his father. His stutter is more pronounced, and he struggles to communicate with this important man. Imagine his surprise when he finds out that he too, is to return to the Golden Mountain with his father. Eventhough he does not want to go, he knows he must. The situation in China is precarious. If bandits do not get paid, they destroy villages. If the weather fails and the crops die, families will have nothing to eat if money is not sent.

Father soon starts preparing the boy for the "test". Gim Lew must learn every answer to any question that American immigration might ask of him. He is only ten. Can he overcome his shyness and his stutter to please his father?

Laurence and Kathleen Yep tell of the start of a journey and the stay at Angel Island. This story is a piece of their family history, though fictionalized. Readers get a clear view of a Chinese village, and of Shanghai as well. The journey on the ship is not glamorous, and one can only imagine the heat and stench of the hold. Even though Gim Lew's father is an American citizen, and therefore his children are too, the racism he faces everytime that he travels is intense and predictable.

The text is chock full of details that will enrich many a lesson on social justice, immigration, and family. There is a fourteen page essay after the conclusion of the book that details some of the hardships and legislation faced by the Chinese (and American Chinese) from the mid 1800s until the mid 1900s. Also included are some family photographs, and photos of the ships and of Angel Island.

A moving piece of historical fiction.
Posted by Stacy Dillon at 8:27 PM No comments:

"Some people think the cicadas bring trouble when they come to town. I don't think that's true. I think trouble finds its way without any help at all". (pg. 1)

This is a summer of trouble for Lily. Ever since everything happend with Pete, Lily has remained silent. She keeps her secrets inside. There are two big ones...what happend to Pete, and the fact that she is, indeed, fine.

And then Tinny comes to town.

Tinny is sneaky, and not in the Nancy Drew way that fuels Lily's fantasies and dreams. Tinny quickly finds out that Lily has secrets that the folks in her small town are overlooking. Lily in turns, finds out some things about Tinny, but in order to keep her own secrets she cannot tell. Can she?

Two interwoven storylines are filled with small town characters and countrified charm, and Cicada Summer is a wonderful addition to the bookshelves of fans of Deborah Wiles, Polly Horvath, and even Sharon Creech. Beaty has captured the sultry feel of summer as well as the world of children that seems so insular next to that of the adults in their lives.

(In the interest of full disclosure, I did meet Andrea Beaty at the Kidlitosphere Conference in Chicago in 2007, but rest assured, this title would not end up on my blog if I did not enjoy it!)
Posted by Stacy Dillon at 8:14 AM No comments: