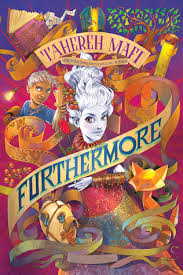 To be honest, I was first drawn to this book because of the gorgeous cover. Who wouldn't fall for the jeweled toned rich hues suggesting autumn evenings wrapped up in cashmere? Then I noticed the girl, front and center oddley white except for a hint of a blush on her cheeks and gold toned eyes. I was curious.

Furthermore joined me on my journey upstate to my summertime reading retreat.  It's August pub date meant it wasn't the first book that I read, but I kept eyeing it as I pulled others from the shelf.  Clocking in at 393 pages, this is not a slight read, but once I started it, I put it down only to sleep.

Alice, almost twelve, is filled with anticipation for Ferenwood's annual Surrender. She is anxious for life to change, because frankly Alice's life hasn't been so easy lately.  Not only is Alice considered odd, even by Ferenwood's magical standards, her father is still missing.  Alice's father is the one who really cared for her and understood her despite her differences from everyone else in Ferenwood. He indulged her and listened to her. And now it was only Alice, her three little brothers and her mother.

Because of her situation, the Surrender is more important to Alice than she can really say.  Ferenwood is a magical place, and everyone who resides there has magical gifts. The Surrender is the time when all the 12 year olds share their gifts upon the stage.  At the end of the surrender, only one child would be celebrated and given a task. The task is always an adventure of some sort and is rather secretive as well. This year there are 86 twelve-year-olds. Alice meeds to win the task in order to leave her home.

But Alice is odd, and she believes that in this magical world, her love of dance is her gift. After all her father always encouraged her to listen to the earth and to dance when she feels it.

Alice's failure on the stage, however, is not the death knell for adventure. An acquaintance of hers named Oliver approaches her with a request. One that will bring her on the adventure of her life if she chooses to accompany him.

What follows is an adventure reminiscent of the Phantom Tollbooth, with a dash of Through the Looking Glass and a coming of age bent.  Furthermore is a place like no other. The orderly magic of Ferenwood is wild here, and the rules seem to change from town to town.  Will Oliver and Alice be able to find her father and bring him home?

This is a fantasy adventure that will keep readers on the edge of the page. Interestingly both Alice and Oliver are unlikeable at times for very different reasons which get slowly revealed as their adventure moves along. At first I was worried about the idea of Alice being white in the sea of color that is Ferenwood.  What did it mean? But it works in that it others Alice in a way but helps explain her own magic as the story unfurls.

I enjoyed the voicey nature of Furthermore. Alice, though exasperating, is endearing as well. I was charmed by the chapter sections' headings as well as the fox! There is a cinematic aspect to Furthermore and I would *love* to see it on the big screen.
Posted by Stacy Dillon at 9:46 AM No comments:

The Peculiar Night of the Blue Heart, by Lauren DeStefano

If there is one request I get from students the most it is, "Stacy! I want a scary book!" This is always tricky business, because invariably this question is not coming from an 8th grader. It's coming from a 4th-6th grader. And honestly, there aren't that many titles. This is one of the reasons I am so thankful for DeStefano.  I first got to know her through The Curious Tale of the In-Between, which is so absolutely creepy and scary in a subtle way. I am incredibly happy to have gotten my hands on The Peculiar Night of the Blue Heart, which is perhaps even scarier.

Lionel and Marybeth live with Mrs. Mannerd in a home for orphans. They are among the youngest in the home and couldn't seem more different from one another. Lionel is somewhat of an animal boy. He would rather eat with the animals and be outdoors with the animals than do anything as seemingly silly as eat at a table with untensils! Marybeth, on the other hand, has perfect manners, is a quiet child, and does things like brush her teeth and comb her hair without even being asked. While everyone else in the house thinks that Lionel is weird, Marybeth does not.

Marybeth often follows or accompanies Lionel out on his journeys into the woods to see the animals. Lionel often talks about the animals he is friends with, and just recently he has been talking about a fox with a blue coat that he saw but is unable to track. One rainy night, Marybeth sees a streak of blue running outside of her window. When she goes to wake Lionel, she is admonished and chased away by one of the older boys he shares a room with a decides that she will go track the animal on her own. She heads out into the dark and rainy night toward the river. As she plummets into the river she is surrounded by a blue light before she surfaces.

When Marybeth shows up back at Mrs. Mannerd's house at the end of the following day, everyone is relieved to see her alive. Lionel is one of the first to realize that the Marybeth that returned to the house is not the Marybeth who left. She is not wearing her glasses anymore, has not plaited her hair. When one of the older boys steals her breakfast because she is too slow, she does something that is decidedly not Marybeth. She lunges across the table and bites his neck!

What was that blue light in the water that surrounded Marybeth?  And how did it get inside of her?

What follows is an absolutely chilling tale of ghostly possession, friendship, madness and family. Moody and atmospheric, readers will be able to picture the settings and feel the tension and desperation Lionel feels as he tries to save his friend.

Posted by Stacy Dillon at 11:40 AM No comments: