Blast from the Past -- Water Street, by Patricia Reilly Giff

Here is a book that I originally blurbed over at Booktopia.  It's a go-to historical fiction and one of my favorite NYC stories. 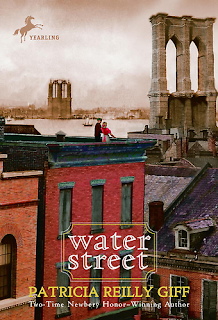 Bird and Thomas are growing up in a Brooklyn apartment just as the bridge is rising. Over on Water Street, Bird is the youngest of 3 - daughter of a bridge worker and a healer. Thomas is pretty much on his own - Da being down at the pub all the time.

Thomas dreams of being a writer. He has fashioned himself a notebook and makes sure to write everything down. He has a shadowy memory of a woman in lace sleeves who told him that writing can change it all.

Bird has her own dreams of following in her mother's footsteps and becoming a healer herself. She has a notebook where she writes down remedies ... sliced onion for bee stings, coal from the turf fire held under the nose for sneezing.

Thomas needs to find his past and try to fix his family.

This is immigrant Brooklyn in the 1870s. Patricia Reilly Giff has managed to bring in so many aspects of daily immigrant life without making it seem like school. The streets come alive (especially when Thomas and Bird venture into Manhattan) with sights and sounds and smells. It was a pleasure to read about Brooklyn instead of the Bowery.

This book is equally suited for older tweens and younger teens. There is a bit of detailed gore described in some healing scenes that may have queasy readers blanching. Told in alternating chapters, the stories of Bird and Thomas come to life and are a pleasure to read.
Posted by Stacy Dillon at 10:06 PM No comments:

Poor Ivy. A Jinx has followed her since she broke a mirror almost seven years ago. No matter where she and her mother move, bad luck follows. In fact, getting to Gumm Street is the first good thing that has happened in a long time. Ivy and her mom have inherited Aunt V's old house.

Gumm Street happens to be the very street where Pru, Cat, and Franny live. You would think that 3 girls of the same age who live on the same street would be friends. Well, they used to be. Not any more. After all Pru is all stuck up with her nose perpetually in a book, Cat is a great big show off and queen of the cartwheels, and Franny has so many big ideas that she cannot possibly follow through with any of them!

When Ivy moves to the block, a piano is mysteriously delivered and the elusive Mr. Staccato - piano teacher extraordinaire - shows up to offer some lessons. Ivy's first lesson shows her that there is something else to Mr. Staccato besides piano! His dogs seem to talk, and he has a museum room filled with movie memorabilia from way before her time. The prize of which seems to be ruby slippers.

An adventure soon begins with the girls having to get together and work together to defeat the crazy Aunt Cha-Cha and her creepy nieces Bling-Bling and Coco. The girls travel to Spoz, then Spudz and each of them works to find their "unique talent" that Mr. Staccato has told them they possess.

I am not sure how to really describe the plot. Elise Primavera has written lots of plot! I think that kids who have read The Wizard of Oz series will get more out of this book than kids who have not read it. There is a large amount of magical realism, and necessary suspension of belief is required to get through. I did, however, really enjoy the book. I think that it is written on a couple of levels where older readers will get the wry writing style and younger readers will get an adventure story.


I had a wonderful time in steamy NOLA for ALA 2011.  Our session on Embedded Librarianship was well attended, the food was delicious, and as always the company was fab.  So onto summer I go.

I am so lucky to have an unplugged summertime retreat.  After the family time is over and the kids are tucked in bed, the books get read!  I am on the hunt for some more tweens to share their reading habits with me.

Happy Summer!
Posted by Stacy Dillon at 5:52 PM No comments: