The girls are back! It's their last summer together before heading off to their various colleges and Jess (and her mom) have convinced the girls that a summer being counselors at Camp Lovejoy. Jess had gone there when she was younger, as had her mom and her aunt.  Most of the girls were up for it, but Megan needed some convincing. She did have her offer of a fashion internship, but she has been reassured that she will be able to take advantage of it another time. So, here they are, piled in the minivan, driving through the pouring rain to New Hampshire.

And summer certainly has its' bumps. The youngest campers are beyond homesick, Emma is still heartbroken over breaking up with Stewart, and Cassidy seems to be rubbing stalwart head counselor Marge Gearhart the wrong way. Plus there is Felicia with her sackbut (look it up!) to contend with.

The shenanigans you'd expect in a summer camp novel are all here, complete with a boy's camp across the lake, pranks and competitions. The girls bring their bookclub to their campers as a way to ease their homesickness.  The book of choice this time is Understood Betsy, by Dorothy Canfield Fisher.

All in all this is a fun ending to a great series. The girls are put in the mothering role and rise to the occasion. Their parents make appearances midway through camp as well as through letters and phone calls. Readers will be able to figure out that Vogel Frederick was a camper herself, and many of the happenings at Camp Lovejoy were mined from her own experiences. I do have to say, I think that a few of the traditions that are at Camp Lovejoy would not actually fly at a camp today -- specifically the one involving the peanuts. That said, these things weren't make or break moments for me.

This will be a treasured series for many, many years to come. I have had students read through all of them as well as the books that the girls read in their book club. We *never* have the full series on the shelf at once and this is a series that kids recommend to each other all the time. If your kid didn't take this book to camp, mail it on out!
Posted by Stacy Dillon at 9:39 PM 1 comment:

The Seventh Wish, by Kate Messner 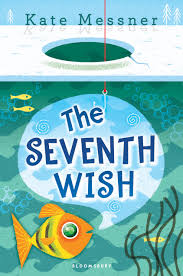 I always look forward to books by Kate Messner. Why? Because I know they will be solid, kid centered and bring something to the table. I had read online that she had recently been disinvited to a school due to the content of her latest book.  I quickly went to my TBR pile and pulled out my copy to give it a go.

Charlie's sister Abby is home from college for the weekend and things aren't going exactly like Charlie had imagined they would.  When she goes to wake Abby up to see if she will come out to look at the lake with her just in case the ice flowers have shown up again, Abby waves her off telling her to just go away. Somewhat chagrinned, Charlie trudges out to the lake only to see that the ice flowers have come back. Her neighbor Drew and his nana are also out on the lake but they are checking the ice for fishing possibilities. Drew tells Charlie about the fishing derby he plans on entering and the prize of $1000 for the biggest lake perch. Since Charlie really wants a new dress for her Irish dancing competitions, she decides to give it a go.

But despite living near the lake, Charlie is scared of its winter ice. So when she joins Drew and his nana, she sticks closer to shore. Soon everyone is landing fish left and right except for Charlie. When she finally pulls one in, it's hardly bigger than the bait she used to catch it. But right before she releases it she hears something. The fish is talking to her. "Release me and I will grant you a wish."

Well, what would you do? Charlie hastily wishes on her crush liking her and to not be afraid of the ice anymore. What harm could wishing on a fish really do?

Anyone who has read a fairy tale knows that wishes can easily go awry. And Charlie's wishes are no exception. While no harm is truly done, Charlie finds herself out on the ice more and more  (since she miraculously is no longer afraid of the ice) with Drew and his nana. Not only is it adding to her feis dress fund, but it's getting her out of the house. It turns out that Abby has changed in ways that Charlie never even imagined. While she was away at school, she started dabbling in drugs which led to a full blown heroin addiction. Who can Charlie even talk to about this? When she thinks about it, she feels ashamed and bewildered. How could Abby, who she had always looked up to, done this?

Kate Messner has written an important book that somewhat gently looks at the fact that anyone can be swiftly taken down by drugs, and specifically by opiates. I live on Staten Island where opiate abuse and heroin are at an all time high.  I commute to Manhattan with my children, and by the time they were 9 and 12 respectively they could tell the difference between someone napping and someone in a nod. They have witnessed police using narcan on people who have OD'd in the ferry terminal. They watched me try to convince the friends of a woman in the throws of an OD to allow me to call an ambulance for her. Kids aren't too young for this story. My kids are living this story everyday they commute. And the brothers and sisters of kids all over our Island are living Charlie's story.  So I would like to applaud Kate Messner for telling this story. It is one I plan on sharing and book talking whenever I get the chance.
Posted by Stacy Dillon at 3:38 PM No comments: