What Our Tweens Are Reading

Over at The Well-Read Child, Jill has started a Thursday "What My Children Are Reading" meme. She invites us to extend the title and apply it to our readers, so I decided to check out our clipboard.

On our reference desk we have a clipboard where students write down the bar codes of the books that they check out when Jen, Jesse, or myself are not in the room. So in the spirit of sharing what tweens in my school are reading, I am hoping to make this a regular feature of this blog (at least during the school year!)

So without further ado, here is what my tweens are currently reading.

The Titan's Curse, by Rick Riordan

Blister, by Susan Shreve
Posted by Stacy Dillon at 9:25 AM 2 comments:

Email ThisBlogThis!Share to TwitterShare to FacebookShare to Pinterest
Labels: meme, round-up, what are they reading?

Have you ever read the first couple of pages of a sequel, smiled to yourself and felt like you had come home again? Well, when I cracked open Al Capone Shines My Shoes I was immediately transported back to Choldenko's world of Alcatraz and into the Flannagan's apartment.

We pick up right where we last let off. Natalie is getting ready to head into San Fransisco to go to the Esther P. Marinoff School. Moose knows that one of the only reasons that she is going is that he asks inmate #85 (also known as Al Capone) to help him get her in. Moose is still confused as to why #85 would help him. Moose has been thinking about this when he heads over to Annie's place. When he gets there, Annie is looking peculiar, and she tells Moose that she got his laundry...and that there was a note in the pocket of his shirt. The note simply says, Your turn. By the way, the con who does the Flannagan's laundry is #85. What can Capone mean?

As if Moose didn't have enough to worry about, Piper is acting out, Mr. Flannagan gets put on probation, Scout seems to be eyeing up Piper, Jimmy is mad at Moose, and staying out of Darby's way is getting harder and harder. Even baseball, which used to make Moose feel better, is getting all political with Annie refusing to play with Moose until he tells about the note in his laundry. Moose is so stressed he is breaking out in hives and itching to beat the band.

Gennifer Choldenko is in her element in this story. It's so masterfully told that it seems effortless and completely believable. The cast of characters from children to adults are spot on and coexist in such a way that readers will feel like they know each and every one of them. Moose's growing pains are palpable, and his need to please will have you reading through your fingers, after-school-special-style. Simply delightful, fans of Al Capone Does My Shirt will be pleased, and new readers can easily pick up the plot and will enjoy this story as well.
Posted by Stacy Dillon at 4:27 PM 3 comments:

Owen Birnbaum is the fat kid. In fact he's 57% fatter than most kids. He's also 1 point shy of genius...a fact that doesn't give him much cred from the other kids in his school. The days when Owen has gym class are worst of all.

Mr. Wooly is the sadistic gym teacher of which nightmares are made. Unless you're a jock, you don't have a chance, and what better target than the fat kid? In his mind, Owen stands up to the attacks and the humiliation, but in reality, classes usually end up in shame faced tears. The three Oreos that his mom puts in his lunch sack are sometimes the only thing that make the day bearable.

One day, his cookies disappear. Everything else in his lunch sack is left behind, and the container that the Oreos were in is actually sealed back up. Owen is beside himself. Now the little bright spot in his day is gone. Right away he starts theorizing about who could have taken his cookies. That new kid Mason left the room before lunch...maybe it's him. After all, Mason is a psychopath with no friends and Owen figures it wouldn't be beyond Mason to take the fat kid's cookies.

When Owen goes home he tries to come up with an invention to catch the thief. Inventing is Owen's thing. He and his sister Jeremy comb the demolition lots of Manhattan looking for parts that they can use. Owen is currently working on a project he calls Nemesis, but figures taking a break to booby trap his lunch sack is worth it.

But what if Owen is wrong? And wrong about more than just the thief.

Ellen Potter has penned an intriguing middle grade novel. Owen is a sympathetic character for sure, but his little sister Jeremy and neighbor Nima are richly written and I can picture spin off stories for each of them. Mr. Wooly, I am sorry to say, reminds me very much of a gym teacher from my own junior high days, and he is sure to elicit strong reader response.

Equally appealing to boys and girls, Slob, is tricky in that it is more than a fat kid story. There are many layers, and readers will most likely take different stories away from it. For some, it will be the story of bullies. For others, the story of a family who has lost so much. It could be a story about the shifting nature of friendship, or a glimmer into the idea of gender identity. Or perhaps all of the above.
Posted by Stacy Dillon at 9:14 AM 2 comments:

You may remember, way back when I reviewed Herbert's Wormhole.

Well, just as a reminder, the book is officially out! Check out the website, or head on out to the store / library and get your hands on it.
Posted by Stacy Dillon at 7:20 PM 1 comment: 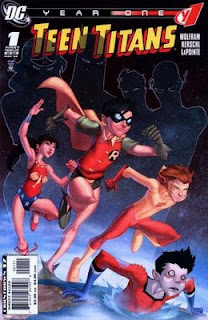 Adolescent angst doesn't get much better than this!

5 young versions of super recognizable JLA heroes are doing what teens do best. Obsessing about their own lives. Kid Flash is wasting away waiting for Robin to IM him back. Aqua Lad is trying to get over his fear of, well...everything. Wonder girl is wandering around the big city crushing on boys and boy bands. Kid Arrow is just trying to prove himself to the Green Arrow. And Robin is wondering what the heck is going on with Batman.

In fact, Batman is not the only one with a problem. All of the adult mentors are intensely wicked. They are mean to their young counterparts and violent in a way that is out of character. Can these teens figure out what is wrong and restore the balance
between good and evil? Can they work things out among themselves once fame hits, or will ego get in the way?

A fun, fast read for both the superhero fan and those who aren't so into the capes and tights set. Lots of action, a blossoming romance, and characters to fit every psyche, this collection of issues 1-6 is certain to be passed hand to hand, from both boys and girls.
Posted by Stacy Dillon at 7:46 AM 3 comments:

Over at Y-Pulse, there's an interesting little article on tweens and their reading habits. Likes and dislikes, opinions on e-readers, genre affinity and other topics.

Head on over!
Posted by Stacy Dillon at 8:21 PM No comments: