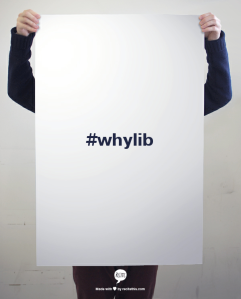 A couple of weeks ago my twitter feed kept revealing a #whylib hashtag. Some of the most creative folks in my PLN were participating, so of course I clicked through and have spent quite a bit of time reading the stories of how so many of the people I admire ended up in libraries.

I didn't start out ever thinking I'd be a librarian.  The public library was always part of my life growing up.  I wrote a post for the Nerdy Book Club outlining my early experience with libraries. (Please excuse the typo in the text!)

My journey to being a librarian didn't start until I was well into my undergrad years.  Originally I was setting my sights on earning a PhD in History.  After meeting quite a few TAs who were mid thesis and having some serious conversations with them, I started to think more about options for someone graduating with a degree in History and Women's Studies.  After a bit of exploring, I starting thinking about Archival Studies...after all, my favourite bits of history were the research ones - especially those dealing with primary sources.  In the last year of my BAH I applied at UBC's program for Archival Studies.  It was not meant to be.  In hindsight it makes lots of sense, but at the time it did sting.  I took a year after graduating to take some extra classes and thought about library school.

Interestingly enough, once I decided on library school, I asked one of my History professors for a recommendation to McGill's program and she told me she thought I was making a mistake.  She had come the other way...she had been a librarian, and then went back for a PhD in History.  She told me that my love of research would be lost in library school.

She wrote me the letter and the next year I started my MLIS at McGill in Montreal.  The degree is a 2 year program that I attended full time.  The summer between first and second year I scored a job in a special library (thanks, Uncle Michael!) and pretty much decided that special libraries were where I wanted to land.  The second year of my program, I was free to take some optional courses and I decided to take a course in YA lit.  My sights started to shift.

My graduation year was 1996  -  a very different time.  This was a time that the NYC libraries came to Canada to recruit folks.  Entry level jobs were scarce in Canada and many of my classmates were moving to the States to work.  My roommates and I attended ALA in San Antonio resumes in hand hoping to score an offer before graduation.  I was still of two minds - special libraries or YA?  An offer came for each, and ultimately I followed my heart and became the YA librarian at a branch of the New York Public Library.

I landed at the perfect branch for me, which is a lucky thing when you think about the fact that there are 81 branches plus the research libraries.  My teens were little goths and punks and comic book addicts and poetry writers.  I know, right?  I had a fantastic branch manager who let me try things like zine workshops and other programs that hadn't been done in house before.

Ultimately my journey has brought me to school libraries, and I have to say this is where I think I belong.  I am lucky enough to work with a team of librarians (also a rare thing for a relatively small school) who challenge me professionally in a school where I am allowed to take risks.

At the end of the day, I am glad I didn't take my History professor's advice.  While I don't pull on the white gloves and tweezers to look at primary resources, I get to have conversations with kids about their reading and their lives.  Every now and again I get an email out of the blue from a former student who has something great to say.  I am immersed in amazing literature written for children and teens. I am exploring technology and learning about and using resources I hadn't heard of the year before.  Each day is different, and I have to say I love it.

Posted by Stacy Dillon at 9:52 PM No comments: