After downsizing and moving to an apartment with his family, Georges (yes with an "s") and his dad are in the basement throwing out garbage when they see a sign posted on a door.  "Spy Club Meeting -- TODAY!".  Much to Georges' chagrin, his dad writes "What time?" on the sign, setting off a series of events that will occupy Georges' days for the next while.

Georges himself, is a big of an awkward kid.  He puts up with the daily microbullying that his mom says is not a part of the big picture.  The big picture of life is kind of like the Seurat print they have in their living room.  If you look at it close up, it's just a bunch of dots, but back away to see the big picture and everything comes into focus.  Thinking about the big picture doesn't make school any easier, however.  The sarcastic clapping at his volleyball moves, the renaming him Gorgeous, the fact that his friend Jason came back from camp completely different -- these things all pepper Georges days.  Add onto this the fact that his nurse mom is always at the hospital, and his dad works plenty as well, and you get a sense of what Georges is going through.

So when somebody answers on the Spy Club sign that there is a meeting at 1:30 and Georges' dad encourages him to go, nobody is more surprised than Georges to find a kid waiting in the basement room.  He first meets Candy, then Safer and their family from the 6th floor.  Safer says that he's a spy and that he's got his eye on one of the building's tenants.  He's creepy -- always wears black and is constantly hauling big suitcases in and out of the building.  Safer teaches Georges some of the art of being a spy, and before he knows it, he is in over his head.

Rebecca Stead has written what could be called the perfect tween/middle grade novel.  She gets kids, and the situations the characters get into as well as their voices are spot on.  Each setting rings true, and the slow simmer and reveal are plotted precisely and perfectly.  Stead manages to pay close attention to detail without slowing the pace of the story.  There is a message in Liar & Spy about empathy and bullying and being an ally, but it doesn't feel the least bit didactic.  This thoughtful book has quickly risen into my top five for the year.
Posted by Stacy Dillon at 2:35 PM No comments:

What have our tweens been reading?  The question should be what haven't they been reading!  Here are 5 titles from our clipboard this week!

Summer of the Gypsy Moths, by Pennypacker

Clover Twig and the Perilous Path, by Umansky 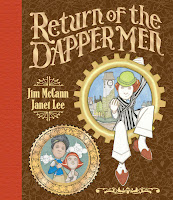 Return of the Dapper Men, by McCann


Liar and Spy, by Stead

Cheesie Mack Is Cool in a Duel, by Cotler