Whew!  The end of school is firmly behind me, as is ALA Annual 2012.  Now I can get down to some serious summer reading!

I have read several great books in a row including Three Times Lucky by Sheila Turnage (who I was lucky enough to have lunch with at ALA), A Year in Coal Harbor, by Polly Horvath, and Drama, by Raina Telgemeier.  All three books are fantastic, and I will get to blogging them soon!

I will also say that if you haven't read our Newbery 2012 books, you should get on that yourselves.  Honors Inside Out and Back Again, by Thanha Lai, Breaking Stalin's Nose, by Eugene Yelchin, and medal winner Dead End in Norvelt, by Jack Gantos are all spectacular tween reads exploring journeys, families, summers and beliefs.

See You At Harry's

Many people have been telling me to read this one for quite some time now, but it just never came across my desk.  I put matters into my own hands, downloaded a copy, and read it in virtually one gulp.

Fern feels a bit invisible in her busy family. They own Harry's, a casual restaurant and ice cream joint that takes up most of her parents' energy.  All of the kids are expected to pitch in, and Fern's after-school time is usually spent in a booth doing homework and trying to keep an eye on her sticky ball of energy little brother Charlie.  But things in Fern's world are beginning to shift.

First off, she is starting middle school.  Now she is going to school with big brother Holden since the high school and middle school share a building.  After a somewhat cryptic warning about bus etiquette from Holden, Fern is distressed to realize just what goes on during the bus ride.  She has always been closest to Holden, and now he wants her to pretend she doesn't know him...all for her own good.  Her big sister Sara has been teasing Holden about his J-Crew sense of style and has been egging him to address who he really is, but Fern had never considered how this might translate on the bus and at school.

Then there are her father's crazy schemes to get more business into their restaurant.  Just before school started, he had the family shoot a basic cable style commercial, and now everywhere she goes she hears little brother Charlie's tagline - "See you at Hawwy's!".  She tries to channel her best-friend Ran's zen nature and starts thinking of his mantra - all will be well.

But suddenly, all is decidedly not well.  After a tragic turn of events, Fern's busy family is broken.  At this time when she needs her parents and brother and sister more than ever, Fern finds herself feeling incredibly misunderstood and guilty.

Jo Knowles has written a powerful story about family and self that packs a punch.  Readers will be able to see themselves in each character turn by turn for better and for worse.  The idea that families really are sets of individuals who fulfill different roles at different times is explored gracefully.  Knowles also gets the voice of the kids and the adults down perfectly.  From Holden's excitement and distance in his first relationship, to Fern's concern for Charlie to her mother's need to get away rather than argue, each character feels authentic and whole. See You At Harry's is a definite must-read for the tween set.

Just a word of warning...make sure to have some tissues handy!
Posted by Stacy Dillon at 12:10 PM 2 comments: 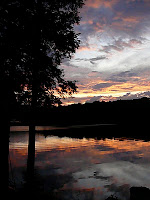 Lately, I've been thinking about kids who choose not to read.  As librarians we know that there are many reasons why certain kids are not readers.  I have a few of them in my life, and I am probably quite annoying to them, as I tend to foist books on kids at every turn.

Nick is one of those kids.  I know him from my real life, not my school life.  I am not his teacher or librarian...simply a neighbor in the summertime.  I've pushed a few books his way over the years...books that I thought he might enjoy, based on what I know about him.  No dice.  Nick is a kid who doesn't like to read.  He was nice enough to answer some of my questions about his reading habits.

What was that book?
It was the Harry Potter series.

What do you like to do besides reading?
I like to practice my instrument or watch TV.

Do other people in your family like to read?
The only person in my family who likes to read is my mom.

Maybe someday I will find something for Nick to read.  Maybe someday he will find the perfect book without my help.  Maybe he will never turn into a reader of books.  The question that I have to ask myself as an adult and a reader and a librarian, is how far to go with the suggestions.  Not all kids like to read, and maybe that's just going to have to be okay.