I made a discovery during my committee tenure last year about books I love.  There are books with chops where I delight in the use of language, setting, characterization et cetera, and then there are heartsong books.  You know, those books that you wax poetic about...the ones that speak to you? And every so often, these two things collide into a book that you know will remain a favourite for all of your days.

This is what Three Times Lucky by Sheila Turnage is to me.

"Trouble cruised into Tupelo Landing at exactly seven minutes past noon on Wednesday, the third of June, flashing a gold badge and driving a Chevy Impala the color of dirt." (p. 1)  Tupelo landing is where Moses (Mo) LoBeau ended up after her mother strapped her to a make shift raft during a hurricane.  She came to stay with Miss Lana and the Colonel and helped them run their cafe.  When local oldie Mr. Jesse turns up dead, Tupelo Landing turns upside down, with Mo and bestfriend Dale  smack in the middle of everything, due to a little bit of borrowing of Jesse's rowboat.

Turnage has managed to pack an awful lot of goodness into this one including a twisty turny mystery, unforgetable characters, family heart-ache, strong girl-boy friendship and memorable turns of phrase.  It is a book that will have readers laughing, wondering and feeling sad in turn.

I was lucky enough to meet Sheila Turnage at ALA in Anaheim and she said that Mo just kept talking to her.  She wanted her story told.  I'm awfully glad Turnage listened to her!
Posted by Stacy Dillon at 7:46 AM 2 comments:

The Incorrigible Children of Ashton Place: The Unseen Guest

As you know, I am a sucker for the boarding school book.  And although these books do not take place at the Swanburne Academy for Poor Bright Females, I can't help but think on such a place as it has clearly coloured our young heroine Penelope Lumley.

In the latest installment, the Widow Ashton and her companion Admiral Faucet (pronounces Fah-say, if you please) have returned to the homestead.  The Widow to see her son Frederick, and the Admiral to woo the Widow and to launch his money making scheme of ostrich racing.  But when the pair arrive, Faucet's ostrich Bertha has escaped into the woods around the estate.  In fact, Penelope and the children come across the ostrich while on a nature hike in the woods, but no sooner do they see her than Bertha is off and running again.

Upon meeting the children, the Widow Ashton is quite taken with them, and Lady Constance who has never shown the children any affection to speak of, starts to fuss over them.  In fact, the first night of the visit, Penelope and the children are invited to dine with the family and they are regailed with the tale of Master Ashton's untimely death in a medicinal tar pit.  After dinner Frederick and the Admiral take the boys back to the study and hatch a plan to get Bertha back.  Faucet wants to catch her and Frederick wants to hunt her.  And they want to take the children due to their unique tracking abilities.

Penelope won't let the go without her and Cassiopeia, and since she is worried about Frederick's abissmal eyesight, she conspires with Faucet to have the expedition take place on the full moon when she knows full well that Frederick will be suffering from his "moon sickness".

What follows is an adventure that only Penelope could get into with the Incorrigibles.  Honestly, not as much happens in this installment as I was expecting.  There are of course the elements of the Swanburne education with the exploration of philosophers like Thomas Hobbes and Jean-Jacques Rousseau, synonyms, and prognostics.  There are also dappled mysteries like the sandwiches in the cave, and the identity of "Judge Quinzy".  But it seems that the biggest thing that is happening in The Unseen Guest is Penelope's own growth.  Why, for example, is she not finding the comfort she used to in the pony books of her childhood, and why does she yearn for adventure instead of comfort?

Overall, fans of the series will eat this one up.  I do hope, however, that the next adventure brings us closer to the reveal of not only the moon sickness, but of the identity of Quinzy as well!
Posted by Stacy Dillon at 9:00 AM 2 comments: 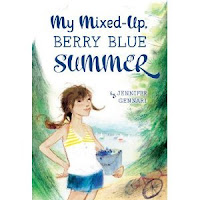 June has been content living with her mother on the shores of Lake Champlain, spending her time baking and selling sweets at the Stillwater Marina, and swimming with her friend Luke. This summer she is dreaming of what pie she is going to enter in the Champlain Valley Fair.  It seems pretty ideal, yes?

It is pretty ideal except for Eva.  Eva has just moved in with June and her mom.  It's not like June didn't know that her mom was gay, but having Eva living with them is making June uncomfortable.  After all, June and MJ have always had a rhythm, and Eva just doesn't fit.  Now that Vermont's civil union law has  passed, Eva and MJ are even talking about getting married!

But not everyone in their town is happy with the idea of civil unions.  In fact, someone even had the nerve to put a "Take Back Vermont" sign on their front lawn.  June isn't even sure what that means, but she doesn't stick around to find out.  After Eva tears up the sign, June takes off with Luke to see the secret blueberry bushes that he found up by the jumping cliff. June can't wait to come back the next week to pick some for her pies.  Before she and Luke leave, however, June's friend Tina's brother Sam and some of his friends show up.  Sam calls June a "lezzie" for being too scared to jump off the cliff, and June starts to wonder if Sam put up the sign on her lawn.  And does Tina feel the same way her brother does?

Overall this is a coming of age story that easily could have turned into a didactic piece about marriage equity.  Gennari has managed to balance the discussion with June's struggles with friendships, her blossoming crush on Luke as well as the everyday growing pains that families go through.  I am always on the look out for LGBT books to put in our collection, and honestly ones that fit the tween audience are hard to come by.  My Mixed-Up Berry Blue Summer fits nicely into not only the LGBT collection, but into tween summer reads as well.
Posted by Stacy Dillon at 11:17 AM No comments:

The Great Unexpected, by Sharon Creech

Naomi lives in the small town of Blackbird Tree.  It is not named because of the shape of its trees, however, but for the many blackbirds that live in those trees.  Blackbird Tree is a bit of a tragic place, where most of the children have experienced some sort of loss.  Naomi is unsurprisingly a bit of a pessimist.  After losing her mother as an infant, and her father in a tragic accident, she has been in the care of Joe and Nula.  But she has always felt a little off kilter about the whole thing.  What if someone comes to take her away?  What if bad things instead of good things start coming out of the donkey's ear from the story that Joe tells?

One fateful day, a boy falls out of a tree right in front of Naomi.  She's not sure if he's real or not-real, so she is happy when her friend Lizzie comes by and lets her know that she can indeed see this boy laying unconscious on the ground.  Where Naomi dwells in the quiet places, Lizzie fills the air with her words, which can be both comforting and bothersome at once.  She fusses over the boy when he comes to, and worries after "Finn boy" who says that he is staying up on the hill with the dim Dimmenses.

Finn has awoken something in Naomi, and she finds that she cannot stop thinking about him.  Each time she runs into him she asks Finn about his life, but he would much prefer to talk to Naomi about hers.  He seems odd, however, visiting the folks in town that others normally steer clear of - folks like Crazy Cora, or Witch Wiggins.  When Finn asks Naomi where he can find Elizabeth Scatterding, who just happens to be Naomi's Lizzie, she finds herself consumed with jealousy.

Meanwhile over in Ireland, Sybil and her caretaker Miss Pilpenny are plotting revenge.  Living at Rook's Orchard, Sybil has enlisted the help of a solicitor to help her with the perfect plan.  There is a Finn boy who used to live there, as well.

Creech has woven together a magical story about family and friendship and the ties that bind.  Each character, no matter how seemingly small is tied to another, and readers will find themselves spell bound from considering the ways in which this is possible in their own lives.   Naomi herself often wonders about the connections between people and places -


The Great Unexpected is a story that defies categorization in terms of story and of audience.  Found within its pages are mystery and magic, old and young, boys and girls, rich and poor.  I just finished it an hour ago, and I already want to read it again!
Posted by Stacy Dillon at 9:57 AM 2 comments: