Jeremy Fink and the Meaning of Life

Here is a pretty cute cover! I have been reading buzz about this title for awhile, and was delighted to find it on my colleague Jen's desk.

Jeremy Fink is about to turn 13. He's not big on change, so he is wondering what this will mean for him, when a mysterious package arrives at his home addressed to his mother. The return address is a law firm. Jeremy and best friend Lizzy decide to open the package without his mom.

What is inside will change Jeremy's life.

It's a box from his dad. His dead dad. It's a beautiful handmade box, with a lock on each side and no keys. Inscribed on the top is "The Meaning of Life. For Jeremy Fink. 13th Birthday."

Jeremy's dad always thought he might die early. Ever since that palm reading on the Atlantic City boardwalk said he would pass at 40. In reality, he was 39. It was a total and random accident, but Jeremy has always been a little suspicious. Had he put this box together right before he died? More importantly, how the heck was Jeremy going to get it open without the keys.

Here starts a summertime bestfriend adventure of the best sort. Jeremy searches for the keys while learning to accept and deal with change. He slowly learns about the man his dad was, and the man he himself is becoming.

I enjoyed this title. As you know, I do like the NYC story, and boy protagonists are always good. The reader has to commit to the title, and I wasn't sure I was going to be able to. There is a MetroCard detail that I didn't quite buy. City kids, no matter how stuck to their neighbourhood, tend to have a kind of media savvy that I haven't found elsewhere. Once I got over that detail, and gave myself over the Wendy Mass' storytelling, I enjoyed the ride.

Posted by Stacy Dillon at 7:21 AM No comments:

My colleague Jen and I were just having a conversation about this the other day. Today over at BookBurger, you can read about the headless covers on teen chicklit.
Why are the girls being decapitated? Really. There's a ton of feminist theory written on this subject, and there just seems to be a proliferation of bodies sans heads!
Posted by Stacy Dillon at 2:39 PM No comments: 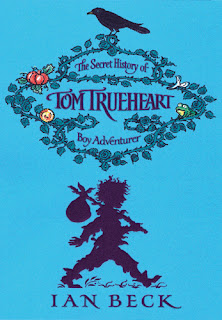 With familiar characters, and a storybook setting, Ian Beck has penned an adventure equally appealing to girls and boys. There is action, intrigue, magic and friendship, and even readers who think they know all about these familiar stories will be surprised! Beck has left the ending wide open for a sequel. Fans of Peter and the Star Catchers, and Capt. Hook will delight in this romp!
Posted by Stacy Dillon at 8:45 AM No comments:

Me and the Pumpkin Queen 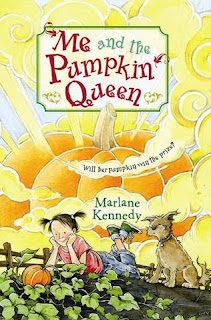 I have a thing for pumpkins. Orange is my favourite colour and I love all foods made of pumpkin. But when this book came across my desk, I was a little skeptical. I am one of the people who tried to read Squashed but couldn't. I know that the age group is different, but I was worried. My worries were unfounded, however. This is a sweet little story.

Mildred isn't like other girls. She isn't all excited about fashion and movie stars. She wears jeans and tees from the discount store and is quite happy with that. Her mom died a few years back, and Mildred and her vet dad are doing the best they can.

What Mildred loves is pumpkins. And giant pumpkins at that. For the past few years she has been trying to grow one that is big enough to show at the Circleville Pumpkin Show, but so far it hasn't happened. Mildred's dad doesn't have a problem with her tomboy ways and penchant for pumpkins. But Aunt Arlene? She's another story.

Aunt Arlene doesn't think that Mildred should be "wasting" all her time on her hobby. She should be hanging out with other girls her age, shopping at the mall and things like that.

What Aunt Arlene doesn't know, however, is that Mildred's mom used to want to grow a big pumpkin for the Pumpkin Show. Mildred is only trying to honour her mother's memory. How can she ever explain that when she can't even say it to herself?

This is a sweet family story. Mildred is coming into her own and standing up for herself. She knows the importance of family and is trying to show everyone that there are different ways to honour someone's memory.

This title will likely appeal to tween girls who love animals and who do not necessarily follow the crowd. Mildred is not a loner by anymeans. She has a best friend and gets along easily with others, it just seems like sometimes other folks don't understand her.