I did not attend ALA proper this year, but I did manage to road trip down with my 10 year old daughter to take a turn on the exhibit floor.

If ALA is ever local to you and you have kids who are old enough to handle the relative overwhelming nature of the floor, I highly recommend it.

The publishers all treated her with care, and we timed it so that she got to meet Tom Angleberger and have him sign a copy of Horton Halfpott complete with illustration.

It was fun seeing ALA through her lens.  She couldn't believe that arcs were for the taking, and she is super-excited to have some new titles to blog about this spring.
Posted by Stacy Dillon at 9:26 AM No comments:

Rooftoppers sat on my shelf for about two months before I pulled it down to give it a read.  I had heard the murmurs that it was not to be missed, and a few pages in I was kicking myself for leaving on the shelf for so long.

Sophie is plucked out of the sea where she has been bobbing in a cello case after the ship she was presumably traveling on went down.  Her rescuer is bachelor Charles, who lives on his own and is decidedly a cerebral sort of gentleman.  According to the National Childcare Agency, Charles is ill equipped to care for a one year old girl, but he knows he possesses all the love necessary to do right by the child.  The NCA decides to let Charles care for the girl for the time being, and worker Miss Eliot vows to stop by to make sure that all is well.

Sophie's upbringing is by all means unconventional.  She is schooled at home according to what Charles deems important: Shakespeare, geography and the art of whistling.  Sophie, however, cannot stop thinking about the mother she is sure she lost when the ship went down.  Charles has alway told Sophie to "never ignore a possible", and though her memories are improbable, they are not impossible. Sophie is certain her mother is still alive and playing the cello somewhere, and she has a growing desperation regarding finding her.  Her phantom memories of trousers worn at the knee are no longer enough.  Once the NCA decides that a girl of Sophie's age needs alternate guardianship and Sophie finds a long overlooked clue, she and Charles decide not to ignore the possible and head to Paris.

Paris is where the adventure truly begins.  A world Sophie never could have imagined is right above her on the rooftops, and it seems that Charles' upbringing was the perfect thing to prepare Sophie for the next steps of her life.

Katherine Rundell has written what can only be described as a modern classic.  It has the feel of a story that has been around for an age, one that is timeless, but somehow has not been done before.  The turns of phrase are magical without crossing into the realm of purple.  Rooftoppers begs to be read aloud, and deserves a place of honor on bookshelves everywhere.
Posted by Stacy Dillon at 2:53 PM No comments: 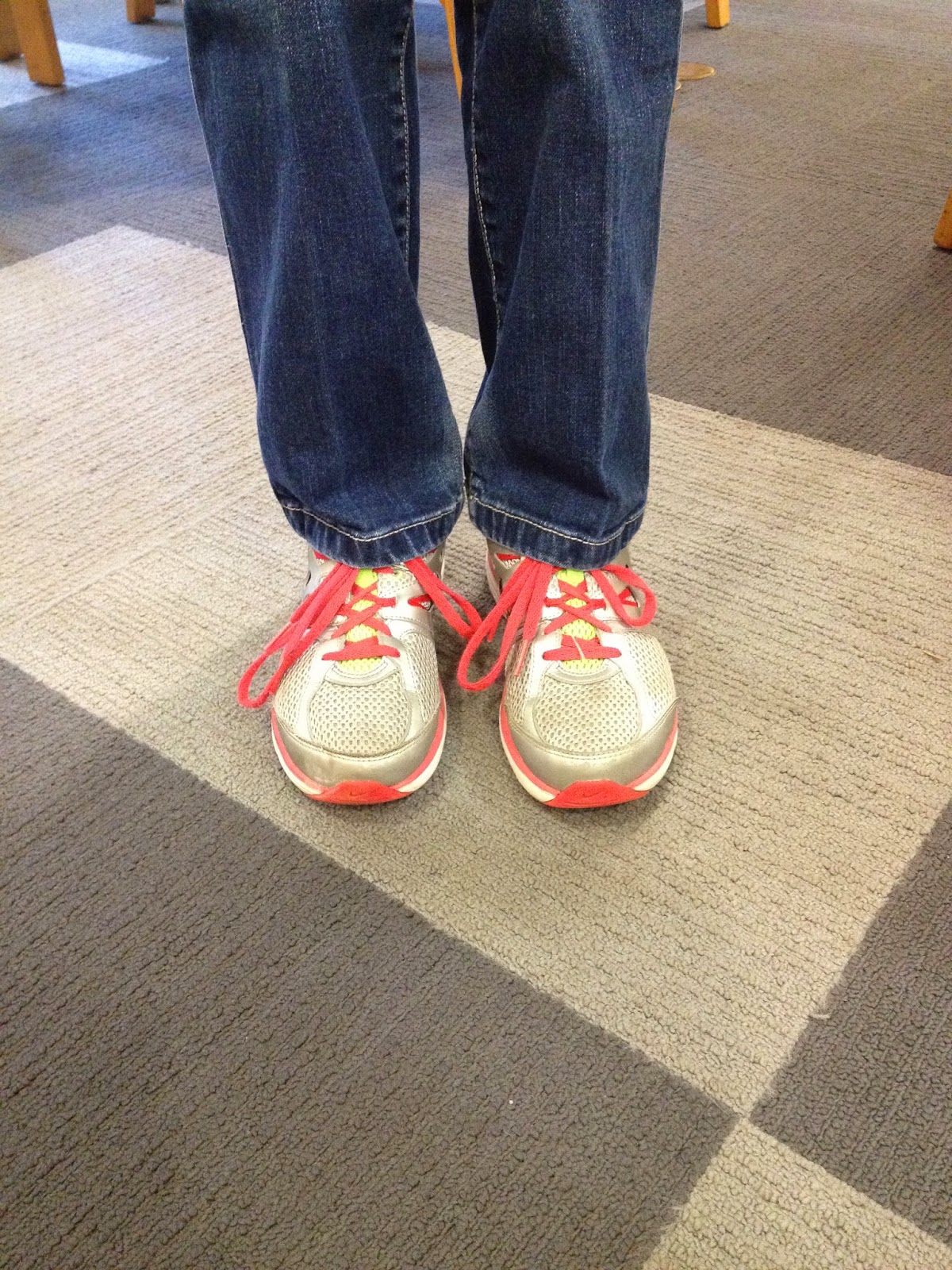 D is a girl who reads all the time.  Seriously.  All. The. Time.

She is always up for a recommendation, has no problem with abandoning a book that doesn't fit, and is super enthusiastic about books.  I asked her if she would answer some reading questions, and she answered with an enthusiastic "Yes!"

Do you consider yourself a reader?
Yes.  A serious one. I love to read and get upset when someone tries to interrupt me.

What are your favorite genres to read?
I love to read Realistic Fiction, but my favorite books are FANTASY!

How do you select the books you want to read?
I look at books that might seem interesting and I read the blurb.  I also get book recommendations and look for other books an author may have written.

What is your favorite thing about reading?
That it takes me to a different world.

Do you read on an e-reader/phone/computer?
No.  I like the feel of paper and the solid form of a book.

What are you currently reading?
The Lord of the Rings, by J.R.R. Tolkien
Posted by Stacy Dillon at 1:17 PM 1 comment:

I was going back through old reviews assuming that I had blogged Better Nate Than Ever by Tim Federle.  Ooops!  If you feel a need to catch up before this one, head over to HuffPo and see what they have to say.

We start off with Nate escaping from his dreary bullied existence in Jankburg to go live with his Aunt Heidi in Queens and understudy for E.T. in E.T.: The Musical.  He's not sure how he is going to make it sans best friend Libby.

His first dose of rehearsal is complete with a sense of disorientation, dread and filled with full time theater kids.  You know, the ones that attend the Professional Performing Arts School for kids?  The ones who have side-eye implied in their questions?  Nate isn't exactly seasoned in theater, but what he lacks in experience he makes up for in enthusiasm and observation skills.  Before he knows it, he is assigned to be Alien #7 as well as one of two understudies to be E.T.  It becomes apparent before long that there is some dissension among the ranks of the director (who doesn't even remember Nate's name), producers and choreographers of the show.

Nate, however, has other things to worry about.

Listen, I'm going to be honest with you -- I am not a musical girl.  I have an active disdain for many if not most things theater, but do you know what?  Federle won me over.  Why?  Because these books aren't about Broadway or call backs or auditions.  These books are about the characters.  Nate is a kid who is definitely a square peg.  He doesn't fit in in his small town, or in his family and frankly he's not a perfect fit in the theater either.  But what Federle does so well is write the relationships.  There aren't any throw-away characters in here.  Everyone is here for a reason and works in a way to either build Nate up, or help him learn something about himself.  The character dynamic doesn't go one way either.  Often Nate helps other characters be more of themselves (Aunt Heidi, Jordan, Asella).

And I would be remiss if I didn't mention these books fill an enormous void.  Yes, Nate is gay, but as he puts it in the first book - "My sexuality, by the way, is off-topic and unrelated".  Federle makes Nate's sexuality only one facet in his life.  There is no hammer of message coming down, which I appreciate and I think readers will too.

Five, Six, Seven, Nate isn't just for theater kids.  Or gay kids.  Or small town kids.  It's the kind of book that crosses genders and genres.  Because after all, it's all about relationships.

Posted by Stacy Dillon at 12:48 PM No comments: