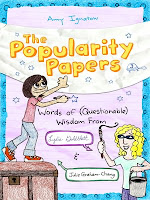 Oh Lydia and Julie, I just can't quit you!

Lydia is back home, and ready to get back of the swing of things in 6th grade in the States.  Lydia comes with a plan of course, laid out in list fashion, but after her first day back, she and Julie decide to try to implement a new plan.  Lydia shares the things that worked for her while she was in London...which includes trying to befriend some kids who don't have lots of other friends and forgetting about the popular crowd.

To help them focus their efforts on more important things, the girls put together a "trunk" (re bucket) list.  Letting popularity go, what could be on the list?   Things like starring in the school play, staying up all night, and being friends with Chuck again.  As usual, while Lydia and Julie have their hearts in the right place, their plans go awry.

What I love about this series is that the girls are growing.  Amy Ignatow doesn't simply employ a formula time and time again, the characters grow and learn from the experiences they have had in the past.  It's actually heartwarming to witness!

Fans who have enjoyed the first and second installments will eat this one up, but I can see new fans jumping on-board as Julie and Lydia grow-up bit by bit.

Middle school is difficult enough for most kids, but for August Pullman, it's especially hard.  August has never been to regular school before, and now for some reason, his mother thinks 5th grade is the perfect time for him to start.  "The universe has not been kind to August", you see.  At 10 years of age he has had twenty seven surgeries to correct a cleft palate and other facial abnormalities.

August starts school early, by meeting a few kids and getting a tour of the school.  The kids are nice enough, but August has been around enough to notice the kinds of things that most adults do not; fake smiles, a shifting gaze, a quick look when others think he's not looking.  Jack, Charlotte, and Julian seem nice enough but August can tell they were hand picked and told not to talk about his face.

Surprisingly, things start off pretty well...at least as good as can be expected.  A girl named Summer sits with him at lunch, his teachers seem nice enough, and August does well in school.  Kids are not flocking to him to be his friend, but he has a small group he can talk to.  As Halloween approaches, August is super excited.  It's his favorite day of the year, because everyone wears a mask, and no one has to look away when they see him.  But a last minute costume switch leads him to overhear a conversation that cuts him to the quick.  How will August get through the rest of the year without friends?

But August is not the only one with a story to tell.  August's sister Olivia, her friend Miranda, her boyfriend Justin,  and middle schoolers Jack, Summer, and Julian all have sections in the book told from their points of view; and in my opinion that is what makes Wonder such a success.  August's situation is extraordinary and is bound to affect everyone around him.  Knowing the motivations of these superbly written secondary characters not only makes August's character more well rounded, but enriches the story immensely.

As with most books with buzz, I went into Wonder cautiously.  I was fearful it might be too precious.  I am happy to say my fears were unfounded.  The voices of the tweens and teens in this book are spot on.  I could easily picture the hallways of Beecher Prep and the students and teachers within.  This is a book that is likely to open some eyes to the idea of compassion, empathy and trying to walk a mile in shoes that aren't one's own.
Posted by Stacy Dillon at 9:31 AM 1 comment:

G is a kid who reads more than anyone I know.  More than folks on Newbery or Printz, more than any reviewer I have ever met.  He reads constantly.  No joke.  More than a book a day, and often.  Today he asked me for a recommendation, and I had nothing for him (notice his last answer).  Everything I have read, G has read...and more!  He is another who has rolled over into the teen zone, but he has been reading this way ever since I met him.  I've said it once, and I'll say it again...not all boys are reluctant.


Do you consider yourself a reader?
I guess so...

What are your favorite genres to read?
Anything that catches my attention.


How do you select the books you want to read?
I take a look at the spines of books and then I read the blurbs of any titles that catch my eye.  Then if I like the blurb, I read the book.

What is your favorite book so far?
Ranger's Apprentice, by John Flanagan
Drizz Do'urden books, by RA Salvatore
and various other books that I can't remember.


What is your favorite thing about reading?
You can imagine that you actually are there, and it serves as a welcome distraction from life.

Do you read on an e-reader/phone/computer?
I prefer the paper version.

What kinds of books do you think are the most popular with kids your age?  Why?
Fantasy and romance because they are between adults and kids so they like both.  They like to read what they dream about.

What are you reading?
Currently nothing, but I am trying to find something.
Posted by Stacy Dillon at 8:07 PM 1 comment:

Email ThisBlogThis!Share to TwitterShare to FacebookShare to Pinterest
Labels: real life tweens, what are they reading?

Hey there.  I have been shelving and shelving!  Here are some things that our tweens have been checking out on the clipboard!

We Are Not Eaten by Yaks, by C. Alexander London

Dragon in the Volcano, by Kate Klimo

A Long Way From Chicago, by Richard Peck 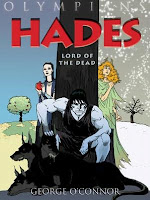 
What have your tweens been reading lately?
Posted by Stacy Dillon at 1:26 PM 3 comments:

Email ThisBlogThis!Share to TwitterShare to FacebookShare to Pinterest
Labels: on the clipboard, real life tweens, what are they reading?
Newer Posts Older Posts Home
Subscribe to: Posts (Atom)