Here are some of the titles that our tweens have been checking out lately.

The Invention of Hugo Cabret, by Selznick

The False Princess, by O'Neal

Science Fair, by Barry and Pearson

The Prophet of Yonwood, by DuPrau

The Adventures of Tintin, by Herge

What are your tweens reading these days?
Posted by Stacy Dillon at 10:14 AM No comments:

Email ThisBlogThis!Share to TwitterShare to FacebookShare to Pinterest
Labels: on the clipboard, real life tweens, what are they reading?

Here at Tweendom, we don't often take part in press releases, however, this is Jackie Woodson.  She is appearing at the 92nd Street Y, and if you are in the area this weekend, you should check this out.


-Our friends at 92Y’s Children’s Reading Series are offering free tickets to Jacqueline Woodson’s appearance this Saturday afternoon. To claim yours, write to them at Unterberg@92y.org by Friday, April 20.
Jacqueline Woodson’s award-winning books include Miracle’s Boys, Locomotion, If You Come Softly and After Tupac and D Foster. She “writes with a sure understanding of the thoughts of young people, offering a poetic, eloquent narrative that is not simply a story of nearly adolescent children, but a mature exploration of grown-up issues,” said The New York Times. Visit her website: jacquelinewoodson.com
Targeted toward 8-12 year-olds (and kids of all ages!), 92Y’s Children’s Reading Series meets on Saturday afternoons and features classic and contemporary literature read by authors and actors. In the last few years, the series has hosted Judy Blume, Brian Selznick, Jim Dale, Kate DiCamillo, Lois Lowry, Katherine Paterson, Natalie Babbitt and Jon Scieszka—and special events on the stories of E.B. White and Oscar Wilde, as well as a 50th anniversary event on The Phantom Tollbooth (with Norton Juster and Jules Feiffer), a 45th anniversary event on A Wrinkle In Time (with Madeleine L’Engle’s grand-daughters) and an 80th-birthday celebration of Maurice Sendak.
Posted by Stacy Dillon at 8:18 PM No comments:

The check outs have remained fast and furious these last few weeks.  Here are some titles that our tweens have been checking out!

Midnight Over Sanctaphrax, by Paul Stewart and Chris Riddell

What have your tweens been reading lately?
Posted by Stacy Dillon at 1:27 PM 2 comments:

Email ThisBlogThis!Share to TwitterShare to FacebookShare to Pinterest
Labels: on the clipboard, real life tweens, what are they reading?

The Secret Tree, by Natalie Standiford 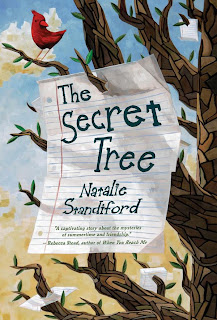 The town of Cantonsville has it's fair share of weirdness going on.  Not only are there rumors of the Man-Bat, but there's the witch lady on the other side of the woods, the legend of Crazy Ike, and one day when Minty and Paz are hanging out, Minty sees a creature in the woods followed by a flash!  Minty crashes through the woods trying to find it.  She loses the creature but finds a strange tree.  It seems to be murmuring and when Minty reaches in the big hole in its trunk she finds a note that she quickly stuffs in her pocket to examine later.

Minty and Paz are best friends with some pretty big roller derby dreams.  Minty, aka Minty Fresh, and Paz, aka Pax A. Punch, have been practicing their moves since they were 8 years old and saw the local team The Catonsville Nine in action.  Paz, however, seems to be distancing herself from Minty in favor of things that are decidedly not roller derby:  things like hanging out at the pool with Isabelle, and wearing glittery nail polish and barrettes.  Minty's summer is definitely not going how she planned.

When Minty is walking down her street she sees that mysterious flash again and takes chase.  This time she ends up at a model home next to the witch's house on the other side of the woods where she finds a boy.   His name is Raymond and he apparently lives there.  Like Minty, he knows about the secret filled tree, and like Minty he is in need of a friend.  Soon the two are skulking around town, finding secrets by good old spying.  But some secrets cannot be stuffed in a tree and forgotten.  Some secrets bubble up and create a big mess before they can be made better.

Standiford has written an ideal summer read for the middle grade set.  Perfectly paced and tightly written, The Secret Tree is filled with mystery, family, friendship, and long summer hours.  Readers are bound to start looking at people and trees through new eyes.

Highly recommended.
Posted by Stacy Dillon at 11:46 AM No comments: