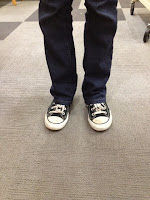 I've been watching L read since she was a wee one.  It became clear very early that she was mad about mythology and fantasy, and it's been very fun watching her grow as a reader.  I asked if she would be open to answering some questions for this blog, and she happily agreed.

Do you consider yourself a reader?
Yes I do because I read a lot and I love to read.

How do you select the books you want to read?
I usually select books from recommendations from my mom and from the school librarians.

What is your favorite book so far?
It's tough to choose a favorite book, but on of them is called "Dear America: I Walk in Dread", by Lisa Fraustino.  Another is "The Blood of Olympus", by Rick Riordan.

Do you read on an e-reader/phone/computer?
I don't usually read on the internet because I like the feel of books.

What kinds of books do you think are the most popular with kids your age? Why?
?

What are you currently reading?

Posted by Stacy Dillon at 2:27 PM No comments:

The Greenglass House, by Kate Milford

Our brains seem to want comparisons.  Every time a new book comes out, editorial blurbs sing, “For fans of….”, or “Blank meets blank in this striking new novel…”  I am both attracted to and wary of these comparisons, because they often create a false hope.  After all, a significant amount of connection to a story comes by what we bring to it.  I was first struck by the gorgeous cover of The Greenglass House, by Kate Milford and then I started hearing the buzz.  I started to hear talk of The Westing Game . Now, if you don’t already know, any time someone asks me what my favorite book of all time is, The Westing Game slides quickly from my mouth.  No questions asked. Over the adult titles that I have swooned about, the Newberys I have loved, the picture books that spawned the art that is matted and framed on my walls, The Westing Game is still firmly on the tippy top of the pile.  So the talk worried me a bit.

Milo and his family have just settled in for the holidays at their inn, The Greenglass House.  The guests have all departed, school is out for a couple of weeks, and it’s officially family time.  Imagine Milo’s surprise when the bell rings to alert the family that a guest is ready to come up the hill in the rail car called the Whilforber Whirlwind. Situated on the top of Whilforber Hill, the inn is somewhat iconic in their town.  Nagspeake is a smugglers’ town, and Milo’s parents are as likely to get paid in goods by the folks passing through as they are money. But smugglers have seasons and the winter holidays are not smuggler time.  Who could be coming to stay now?

Milo and his family are even more surprised when the bell keeps ringing!  More than one guest?  What is going on?

After the passel of guests shows up, Milo’s folks call on their regular help to come and help with meals and rooms and such.  Since it is break, the cook brings her kids and even though  Milo has never met Meddy before, the two get along famously even starting to role play using Odd Trails -- a game Milo’s own dad played when he was young.  Milo’s personal character Negret comes in handy when guest’s belongings start disappearing.

This is such an atmospheric, multi layered story -- I just can’t say enough about it.  When you put all of the aspects of the story into writing, they can seem overwhelming.  We have the mythos of the town, the rules of the game, the mysterious guests, the criminality afoot, Milo’s own adoption story and sense of self, the lore of the house...it goes on and on.  But in Milford’s deft hands all are perfectly balanced and unfurled just so.  I started to slow down as I read this one, because I didn’t want it to end.  I ache to see this on the big screen, and am anxiously awaiting the first real snow of the season so I can hunker down and treat myself all over again!
Posted by Stacy Dillon at 4:23 PM No comments: