Hereville: How Mirka Got Her Sword, by Barry Deutsch 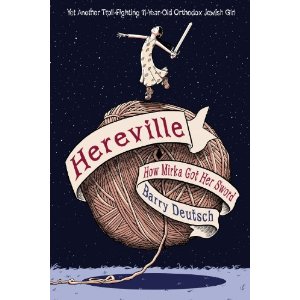 Readers get a sense of who Mirka is from the very first panel in this charming graphic novel.  While Mirka (who would rather be out fighting dragons) is knitting, her stepmother informs her that she dropped a stitch.  Instead of pulling out her knitting to the dropped stitch and continuing, Mirka argues with Fruma that Hashem must have preordained the dropped stitch, so why should she fix it?  That's Mirka; strong willed, a bit against the grain, and her own girl.

Mirka lives with her family in the Orthodox Jewish community of Hereville.  Expectations are clear, and Mirka and her siblings know what is expected of them.  What is unexpected is the tall, narrow house that Mirka finds in the woods one day.  Mirka brings her brother and sisters back to the house to prove to them it's real, but instead of seeing the floating witch that Mirka insists she saw, all they see is a giant pig that appears when Mirka takes a grape off one of the vines by the house. Mirka has never seen a pig before, and this proves very scary indeed, especially when the pig decides to chase her!

Before she knows it, the pig is pretty much haunting Mirka.  Even though her stepsister tells Mirka just what a pig is, Mirka is convinced that it's a monster and even searches through her forbidden Monster book to find information about it!  Mirka becomes obsessed, insisting that the pig has stolen her homework and decides that she is going to catch it once and for all!  She enlists little brother Zindel and they are soon hatching a plan to catch the pig and to rid Zindel of the bullies that have been tormenting him.

What follows is a wonderful blend of fantasy, quest and a window into the Orthodox Jewish world.  Mirka manages to get what she wants without outright rejecting her culture and faith, but finding ways to work them into her desires.  There is nothing that Mirka loves more than her family, and her quest to have a proper sword proves to be an awakening of sorts on this very topic.  Deutsch's portrayal of the relationships between siblings as well as those between children and parents are completely realistic, and readers will be able to identify with the characters regardless of their faith or their cultural background.

Completely different and refreshing, Hereville will quickly rise to the top of the recommendations that kids give to other kids.
Posted by Stacy Dillon at 2:02 PM No comments: 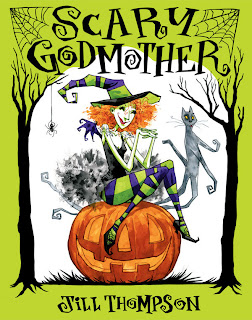 I have been a fan of the Scary Godmother for some time now.  I loved the cartoons on television, and was bound a determined to find some of Jill Thompson's books of the same name.  It was hard, however, as they seemed to be out of print.  Thanks to Dark Horse Books' release of all of the stories bound together in one GORGeous hardcover edition, I was able to go to my local independent comic shop and pick up this coffee table worthy book.

Found inside are 5 quintessential Scary Godmother stories: "The Scary Godmother", "The Revenge of Jimmy", "The Mystery Date", "The Boo Flu", and "Tea for Orson".  Readers will quickly get acquainted with life on the Fright Side as well as the main characters of The Scary Godmother, Hannah Marie, Jimmy, Skully Pettibone and the rest.  Told with panels, but with straight lines of text as well, Scary Godmother truly blends the lines between graphic novel, illustrated novel and picture book.

The big sell of this collection is, of course, Thompson's art.  She is an accomplished illustrator who has worked on everything from Sandman to Wonder Woman .  Her spooky palette of orange, black, purple, and green will appeal not only to the youngest tweens, but to burgeoning goths as well.  My personal favourite panels are in silhouette with orange background and show such scenes are Scary Godmother swooping down the stairs with Hannah Marie, or a macabre parade of monsters heading over to Scary Godmother's place to find out who she fancies.

Do yourself a favor and pick this one up!
Posted by Stacy Dillon at 12:54 PM No comments: