The Secret Identity of Devon Delaney

Have you ever pretended you were someone else? Maybe lied a bit about a nickname, a boyfriend, a circle of friends, a band you saw?

Well, Devon spent her summer lying to a cool new friend named Lexi, after her folks shipped Devon and little sis Katie off to the grandparents while they tried to get their relationship back in order. Devon (or Devi) told Lexi all about her circle of cool friends, and her hot boyfriend Jared. What's the harm...Devi figured she'd never see Lexi again.

Imagine her surprise when Lexi shows up in Mr. Pritchard's class. Now what is Devi going to do? Jared doesn't know she's alive, all of her cute clothes are summer clothes (from her parent's guilt money), and Kim and the popular girls are not really her friends.

Devi digs in deeper and deeper with more lying, instead of coming clean. Soon she's in a spot where a really cool boy likes her, but she can't let on. And sooner than later, her house of lies starts to crumble.

Lauren Barnholt has written a pitch perfect tween school story. Who hasn't lied? Who hasn't wished for a bit of a different life? The interactions between the characters are authentic and Devi's family (problems and all) makes for a great backdrop for Devi's growth. Fun, fast, and filled with tween-speak, this supercute read should fly off the shelves.
Posted by Stacy Dillon at 11:10 AM 1 comment:

Head on over to Toadhillreviews to check it out.

Thanks to 3 Evil Cousins for the link!
Posted by Stacy Dillon at 8:14 AM No comments:

Diary of a Wimpy Kid

Okay, okay...I know that I am late to the party on this one. The problem is that this book stayed checked out from the moment we got it in at the library until the last day of school! I finally found it at my local public library, and happily read it in anticipation of #3 coming out this fall.

Greg is just a typical kid trying to make a go of it in middle school. His mom gave him the journal (NOT a diary, thank-you-very-much!), and he figures that it'll save him time when he gets older and famous in that he won't have to explain his upbringing. But before he gets famous, he's stuck negotiating the halls, Hallowe'en, the school play, as well as the world of popularity and girls.

Greg is trying to convince his friend Rowley that it is time to grow up a bit. Why can't Rowley ask him to "hang out" instead of "play"? Especially when they are in the hallway at school. The thing is, as much as Greg's big brother and some of the other kids at school aren't so nice to Greg, Greg is not very nice to Rowley either. He mainly uses him to get to play video games when he is punished. Can their friendship survive middle school?

Filled with funny and gross moments (like the cheese on the playground, and the Big Wheel birthday), Jeff Kinney has certainly struck a chord with readers. The comic style illustrations pepper the pages and add extra doses of humor to the book. I can say with authority that both guys and girls love these quick reads, and I myself cannot wait to finally get my hands on the second one.

There is certainly a lack of books for tweensters with male protagonists, and there is a lack of funny across the board. Diary of a Wimpy Kid fills these holes with panache. Do yourself a favour if you haven't already...buy multiple copies!
Posted by Stacy Dillon at 10:29 AM 3 comments: 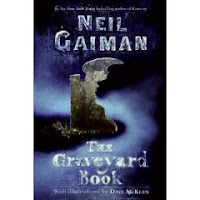 We begin with a murder. A triple murder, in fact. The man Jack was trying for a fourth, but the little baby had a habit of wandering, and he had left his crib, bumped down the stairs, and gone out into the night.

Jack wasn't worried, however. He knew that his keen sense of smell would lead him to the child. He ends up at the graveyard, and he knows that the child is there. What he doesn't know is that after a visit from his newly dead mother, the baby has been taken in by some "residents" of the graveyard, and that he is being protected by a "man" named Silas. Jack is sent off.

The child, named Nobody Owens, exists in the graveyard with ghostly teachers and friends, exploring and learning while knowing that Jack is out there, and is still out for him.

Gaiman has brought a wonderful story in the vein of Coraline. Superbly creepy, outright scary, yet sweet and filled with melancholy. I simply cannot wait to see Dave McKean's art added to the mix for the final copy. Also head on over here for additional information and some incredible illustrations.
Posted by Stacy Dillon at 1:29 PM 1 comment:

My One Hundred Adventures

Jane is living with her poet mother and her 3 siblings by the beach during the summer of her 12th year. Their existence is minimal, yet they really do not want for much. Jane is, however, yearning for adventure. And when she prays one day for Mrs. Parks and not Mrs. Nestor, her energy gets blocked and she feels a need to be redeemed. Following her "healing" preacher to distribute bibles, Jane's adventures begin. From searching for "poodles" connecting the worlds, to babysitting the horrid Gourd children, to catching glimpses of who her father may be, Jane's summer is anything but typical.

In true Horvath fashion, many questions go unanswered. But the sense of place is so compelling that readers won't mind the threads that are left to dangle.

This may be my favourite Horvath title. The writing of course, is superb. There is a dreamy quality to it, and the setting of the beach is just perfect. Horvath really gets the world of children that many adults overlook. Jane is very interesting, as are the old women of the book. A delightful summer read for the deep readers in your life!
Posted by Stacy Dillon at 3:34 PM 1 comment: