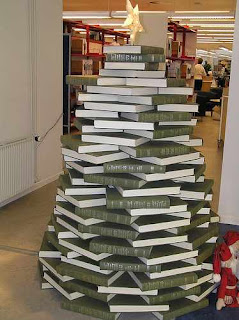 I am taking a bit of a family holiday break here! Come on back post January 1st.

The Best of the Year

Well, the best that I read this year, anyway! As you can tell from the last posts, I love the lists. Some readers may know that I used to hold down 2 blogs...this here Tweendom, and the now defunct Booktopia. Booktopia was the place that I discussed picture books, young adult books and the occasional adult title. Last year I decided to break down my favs of the year into several top 5s, and this year I am adding another category. So without further ado, here are my favorite 5 picture books, tween titles, young adult titles, and graphic novels of 2009!

The Lion and the Mouse, by Jerry Pinkney
Birdie's Big Girl Shoes, by Suejean Rim
Let's Do Nothing!, by Tony Fucile
Billy Twitters and His Blue Whale Problem, by Mac Barnett, ill by Adam Rex
Yes Day!, by Amy Krouse Rosenthal, ill by Tom Lichtenheld

Secret Science Alliance and the Copy Cat Crook, by Eleanor Davis
The Storm in the Barn, by Matt Phelan
Stitches, by David Small
Lunch Lady, by Jarrett J. Krosoczka
(okay...so 4 of these!)


So, there you have it. Of course these are my opinions of the best that I read this year. Best is an idea that is quite personal, and for my purposes here these are the ones that made me smile, flip pages desperately, and made me want to share the titles with the kids, tweens, and teens in my life.

What made your list?
Posted by Stacy Dillon at 7:53 PM 3 comments:

I am constantly looking for LGBT books to share with our kids and families. I am very lucky to work in a school that celebrates all kinds of families. Generally speaking, picture books and young adult books dealing with LGBT themes are pretty easy to find. It's the middle grade area that gets sticky.

Luckily for us, Lee Wind over at I'm Here, I'm Queer. What The Hell Do I Read? has put together a Middle Grade Bookshelf featuring titles where the tweens/teens are LGBT or questioning, and another list that features titles with family members or people in a tween's/teen's life are LGBT.

Head on over to check it out!
Posted by Stacy Dillon at 1:50 PM 2 comments:

Email ThisBlogThis!Share to TwitterShare to FacebookShare to Pinterest
Labels: around the blogs, lgbt, lists

It's 8th grade year for the girls and changes are afoot. Jess is surprised to learn that she has just received a scholarship to snooty Colonial Academy. Jess could care less about the scholarship...she just wants to stay at Walden Middle School with her friends. Her parents, however, keep talking about opportunities, and college, and want to reach a compromise of having Jess board at the school during the week and come home to help at Half Moon farm on the weekends.

Without Jess at Walden, Emma is a bit sad. She misses Jess, and even though things are warming up with Stewart and she is editor of the paper, she still feels like something is missing. If only her parents would finally say yes to a dog...

Megan's grandmother has moved into the house and Megan finally feels like someone understands her. Gigi is totally into fashion and travel. She is an amazing cook who even uses meat (gasp!) in her dishes. But the closer Megan gets to Gigi, the more annoyed her own mother seems to get.

Among all of the changes, Becca and Cassidy actually have something common. Their mothers seem to be going a bit crazy. Mrs. Chadwick has discovered a whole new her, complete with outrageous outfits, spiky hair, and animal print glasses. Mrs. Sloane-Kincaid is always tired. She's nauseous and napping.

The book club is changing too. The club is reading Daddy-Long-Legs, by Jean Webster, but what is new to the club are the pen-pals. Mrs. Hawthorne has been in touch with her old college friend who has her own mother-daughter book club, and they thought it would be great for the girls to write to each other while reading the same book. Some of the girls aren't too pleased about this...after all, who even writes letters anymore. Texting or emailing would be so much easier. But the moms stand firm. Old fashioned letters with stamps will be sent!

What follows is a story complete with nasty room-mates, sleep-over pranks, road trips, first kisses and secrets kept from friends and mothers alike. Heather Vogel Frederick's latest installment in the series will not disappoint fans of the first two books. The girls are growing in real time, and their 8th grade problems are different form their 6th grade ones. Each character, though somewhat typed, brings something fresh to the table in Dear Pen Pal. Cassidy's growing away from her jock persona and Emma's geek is ascending the social ladder with the help of her girlfriend status. But the characters never lose their souls over it. The changes simply feel true to the tumultuous times of middle schoolers.

I can't wait to see what the book club reads next!
Posted by Stacy Dillon at 8:16 PM No comments:

I am a list girl. I love lists. This is one of the main reasons that I love this time of year. I get to reflect upon what I have read, and to figure out whether it has stuck with me, what I still like about it, or if it has faded away. I no longer mourn for those titles that I didn't get to. I have faith that the good ones will draw me in some day.

Before I go on to make my own top 5 lists, I like to browse the others that are floating around. Luckily, the talented Chicken Spaghetti has gone and pulled many of the lists together on her page. Head on over to check them out.

Are any of your favourites there?
Posted by Stacy Dillon at 7:37 PM 2 comments: