I am a child of the 1970s, so of course I saw Star Wars, The Empire Strikes Back and Return of the Jedi in the movie theatres right when they came out.  What kid didn't?  I did not, however, keep up with the series and see the other movies.  As my neighbor Nick (14yo) always points out, "Stacy, why do you keep saying you saw the first three?  You really didn't, you know.  You saw Episodes 4, 5, and 6!".  Yes, I know.  I put this out there to let you know that even though I am not particularly well versed in the new/old Star Wars movies, I got a tremendous amount of enjoyment out of this graphic novel/ illustrated novel hybrid.

Roan Novachez has always known that he is "destined to attend Pilot Academy Middle School and become the GREATEST star pilot in the GALAXY." (p. 1)  But destiny seems to take a wrong turn for most of us in middle school, doesn't it?  Roan's friends all start receiving their acceptances to the academy, but his letter seems to be taking longer than everyone else's.  Instead of following his brother Dav's footsteps into the pilot life, Roan receives his rejection letter from the school.  He is devastated.

Soon, however, he receives a letter from the Jedi Academy.  Complete with a hand written note by Yoda himself, Roan is invited to attend the school even though most kids are accepted when they are toddlers and Roan himself didn't even apply.  It seems rather curious.

When Roan gets to the academy, he really feels like a fish out of water.  The other kids been there for a while, and they all seem to be able to use the force in controlled ways.  Roan is working on figuring out not only the force, but how to navigate the typical middle school things that all kids deal with no matter what planet they are from.  Things like dealing with bullies, figuring out where to sit in the cafeteria, opening his combination lock, and navigating a dance!  There are some things unique to Roan's situation as well - trying to understand what the heck Yoda is talking about, wielding a light saber, surviving a camping trip involving Wookies!

This is a fun and laugh-out-loud look into middle school that happens to be situated in a Star Wars culture.  Readers needn't be super well versed in Star Wars to enjoy Roan's adventures.  The cover will definitely attract younger readers, but I do think that the audience that will get the most enjoyment out of the story are 4th-6th graders who are wading into similar waters.
Posted by Stacy Dillon at 10:00 AM 1 comment:

Listening for Lucca, by Suzanne LaFleur

Siena's family is about to abandon Brooklyn for the beaches of Maine.  Siena doesn't really mind.  There's not much tying her to Brooklyn anymore.  Her once deep friendship with Kelsey has fizzled since Kelsey no longer seems interested in Siena's dreams or imaginings.  And honestly, Siena is a little frightening about what has been happening to her lately.

She has always had vivid dreams, but now these dreams are creeping into her waking hours.  Scenery seems to shift and she finds herself viewing history, when she should be seeing what everyone else is seeing.  Maybe Maine will help?

The move is not for Siena, however, but for her little brother Lucca.  Lucca used to be a run of the mill little kid...sticky and loud.  But now Lucca is silent.  Siena's mom is desperate for anything that will give her son a voice again.

Once Siena is in the new house, she just knows that there are ghosts.  What's more, is that Lucca seems to sense them too.  She has no sooner unpacked her collection of abandoned things, when her vivid dreaming and visions start again.  Only now Lucca is scared, and Siena promises him that she will get to the bottom of things.

When Siena finds an old lost pen high up in her closet, pieces of the past come forward and help her to understand not only her dreams and her visions, but her family as well.

This is a lovely slow reveal of a book that will delight detail oriented readers.  LaFleur weaves the story together with invisible strings that form a delicate pattern that becomes clear in due time.  Each character is fully developed and the past and the present storylines never compete with each other; rather they complete each other.

Simply captivating.
Posted by Stacy Dillon at 6:32 AM 1 comment: 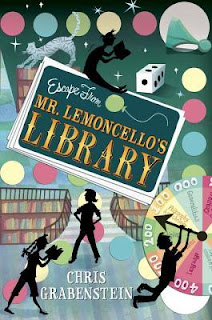 A bit ironic as I was trying to escape from Chicago's O'Hare airport when I started reading this one!  Honestly, I wasn't in the best frame of mind when I opened the cover.  I was delayed, then canceled.  Many hours and gate-changes later, I was delightfully immersed in this book written so clearly for book lovers!

Kyle Keeley comes from a family of gamers.  Not just video games, either...board games too.  And in Kyle's opinion, the king of the game makers is none other than Mr. Luigi Lemoncello of Lemoncello's Imagination Factory.  Too bad Kyle isn't as interested in school as he is in games!  His friend Akimi has to remind him on the school bus that he was supposed to write an essay on why he is excited about the new public library.  The old public library had been torn down 12 years ago, and now there is a contest asking the 12 year olds of the town to write about the new library.  The winners of the contest will be able to participate in a library lock in before the space is opened to the public.  Kyle furiously scribbles his half hearted essay on an extra piece of paper on the bus ride to school.

Kyle is soon kicking himself about his lack of effort on the essay as he soon finds out that Mr. Lemoncello himself is going to judge the essay contest since he is one of the new library's biggest benefactors.  But here's the thing about Kyle -- he's not a kid who gives up and he finds a way to write a better essay and he tries to get it to Mr. Lemoncello himself.

Imagine everyone's surprise when Kyle is one of the 12 chosen for the library lock-in.

What follows is a wonderful ode to all things library.  Cool state of the art gadgets, crazy technology, and all kinds of clues will keep book lovers glued to the pages once the 12 12 year olds realize that this isn't any old library lock in.  Lemoncello is Wonka personified, and the title dropping is a hoot.  All of the ideas wouldn't work without Grabenstein's tightly written prose and vivid descriptions.  This is a great book that I cannot wait to get into the hands of my book lovers come the start of school.
Posted by Stacy Dillon at 10:52 PM 3 comments: 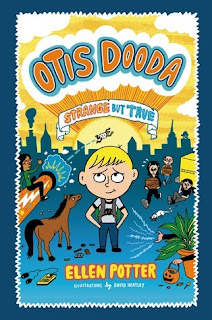 I told myself that while I was at ALA, I wouldn't pick up arcs.  Then a school marketing person handed me two arcs, and publishers gave some to me, and you know how it goes!  The result is that I've been reading a bunch, and now that it's summer and my commute is simply from my bed to the lake, I actually have some time to blog.

The first up, is Ellen Potter's new book Otis Dooda: Strange But True.  Potter has stepped out of her wheelhouse with this illustrated novel for the younger set, but since Potter is writing it, you know the writing is tight.

Otis and the rest of the Dooda family are making a move to NYC.  They are moving into the 35 story Tidwell Towers, which impresses Otis since it looks like it's made up of LEGO blocks!  Otis notices the automatic door and thinks that moving is "kind of cool, like we were moving into a Price Chopper Supermarket!" (p8)  The automatic doors aren't the only thing that is different from Otis' old place...there seems  to be a kid skulking in a potted plant in the lobby.  It turns out that he gives everyone the shakedown for candy and other goods when they come into the building, and if you don't pay up he curses you!

Otis finds this out the hard way, refusing to sacrifice his homemade LEGO lie detector.  Otis gets the details when he befriends Perry, a kid on his floor with the strangest looking and smelliest dog you've ever seen.  One of the great things about Tidwell Towers is that there are lots of kids, and before long Otis is hanging out with Perry, Cat and Boris and they are hatching plans to put the kibosh on the plant guy.

What follows is an often hilarious tale of the often dysfunctional apartment slash big city life.  As I said, this isn't what I would necessarily expect from Potter, however, I know at my library I have daily requests for "something with lots of pictures, like Wimpy Kid", and this fits the bill.  Strange parents, a creepy older brother, rats and poodles,  friends with parents with odd jobs, and trying to dodge the inevitable summer enrollment in classes all come into play.  The humor is sly and horse rear end oriented at the same time, and readers will likely laugh out loud along the way.
Posted by Stacy Dillon at 2:16 PM No comments: