Wow!  2013 was quite a year for books.  I kept getting nervous while choosing the next book since I kept reading good books.  I was ready to be let down, but thankfully there were very few let downs for me.  Please enjoy the following top 5s from my reading year.  Let it be noted that these lists haven't been balanced in any way...they are my from the heart favs!

What the Heart Knows: Chants, Charms and Blessings, by Joyce Sidman
The Mighty Lalouche, by Matthew Olshan
Ball, by Mary Sullivan
The Day the Crayons Quit, by Drew Daywalt
A Splash of Red: The Life and Art of Horace Pippin, by Jen Bryant

P.S. Be Eleven, by Rita Willaims-Garcia
Flora & Ulysses, by Kate DiCamillo
Seeing Red, by Kathryn Erskine
The Real Boy, by Anne Ursu
From Norvelt to Nowhere, by Jack Gantos

Posted by Stacy Dillon at 9:35 PM No comments:

One of the best things about living in NYC is the proximity to so many publishing houses.  We are often able to attend a variety of publisher previews where editors and library marketing folks let us in on what is coming up.

Last week I was able to attend a preview at Penguin (since the 3rd graders I usually teach at that time were at the Natural History Museum).  Here are some of the upcoming titles that I am excited to get my hands on!

The Ghosts of Tupelo Landing, by Sheila Turnage
I adored the first one, and we were lucky enough to host Sheila at school last fall.  Her characters are unforgettable, and I can't wait to dive back into one of my favorite towns. (Publishing February 2014)

The Last Wild, by Piers Torday
I'm intrigued by the premise of a world where animals no longer exists.  It is being touted as a "quest, a tearjerker and an environmental fable".   It sounds like it will be a perfect fit for so many of my readers! (Publishing in March 2014)

The Sittin' Up, by Shelia T. Moses
Bean and Pole of the Low Meadows are very upset that Mr. Bro. Wiley has passed, but they are also excited to be attending their first sittin' up.  Countrified and quirky, just like I like them!  (Publishes January 2014)

The Blossoming Universe of Violet Diamond, by Brenda Woods
Biracial Violet's mom is white and her dad (who died before she was born) was black.  Violet is tired of being the only brown person in her world and starts to reach out to her late father's family.  I'm hoping this will be as good as I want it to be!

The Nethergrim, by Matthew Jobin
I starred this as soon as the editor said, "smart literary fantasy with enough air and land to satisfy dreamers and realists alike."  It was also promoted as a read next for Ranger's Apprentice fans. (Publishes April 2014)

Nightingale's Nest, by Nikki Loftin
Winner for the best cover, this book is "inspired by a Hans Christian Andersen story" and seems like it has just the right amount of magical realism. Blurbed by Anne Ursu as well!

Posted by Stacy Dillon at 9:12 AM No comments:

Maker Monday - aka Passive Programming in the School Library

Today I attempted my first Maker Monday, and I have to say, it was a modest success.  It does help that I have my own daughter with me who is willing to jump in to any and all things crafty.  I started easy, with a craft that many children already know.

But I took it up a notch by asking the kids to write a hope or dream for the New Year on their snowflake. 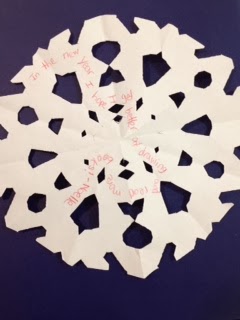 I simply printed out step-by-step directions, along with diagrams of the necessary folds.  I found it necessary to individually ask some kids to come over to the table, but most were willing and they were all willing to help one another.  I had a mix of 3rd, 4th, 5th and 6th graders complete the craft.

I told a couple of the parents that this would be a Monday thing, and there was only positive feedback.

Posted by Stacy Dillon at 10:08 AM No comments:

For those of you who are not members of ALSC, you should know that they have just published a booklist for tweens.  I took a look at it, and as someone who has read 17 of the titles, it is a solid list.  In fact, my most favorite tween read of the year is on that list.  Why not head over and check it out!
Posted by Stacy Dillon at 11:59 AM 2 comments:

Email ThisBlogThis!Share to TwitterShare to FacebookShare to Pinterest
Labels: ALA, ALSC, booklists, favorites

What book did *you* write?

I love sharing a desk with two other librarians.  It's wonderful to have folks that I respect to bounce ideas off of.  We get to discuss books and movies and kids.  Both of these librarians have written books and our students know this, so eventually almost every kid asks me, "Stacy...what book did *you* write?"
They are often shocked to find out that I have not written a book, and that I am not writing a book, and even more so that I have no desire to write a book. The thought of writing fiction terrifies me.  I am a happy consumer of story, and while I do produce story in my daily life, I have neither the chops nor the talent to dive into something as arduous and time consuming as writing for others.
I have dabbled in group creation like writing camp, and I am noticing all of the folks committing to writing during #nanomo and #nerdlution . What I have learned is that it is not for me.  I have also learned that figuring this out has set me free.
I have often thought about writing.  I do enjoy writing my own poetry, and if I ever were to do all the necessary work to create a book, it would likely be the wonky non-fiction that I love.
My hat is off to those who are passionate about writing and story. Know that there are equally passionate readers out there, and we salute you!
Posted by Stacy Dillon at 8:09 AM No comments: