One Book. Two Perspectives. My Diary from the Edge of the World, by Jodi Lynn Anderson 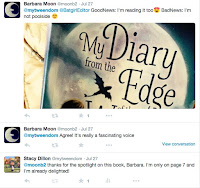 Oh, twitter.  Sometimes you are a wonderful thing!  Last July I was at my daughters' swim lesson reading away, and I shared a shot of the book I was reading online.  Barbara, it turns out, was reading the same book and we began somewhat of a back and forth as you are want to do when you find out someone besides yourself is smitten.  We decided we would co-blog closer to the publishing date, and here are our thoughts!

Barbara:  Gracie Lockwood's voice immediately drew me into the story. She keeps a careful record of the family's journey in a diary, a gift from her mother. It is lovingly inscribed with these words, To Gracie, May this diary be big enough to contain your restless heart.  Gracie is a girl with strong opinions, stating from the outset that her purpose in keeping a written record is to "prove that I knew it first." Her friend Oliver's observation, "You're kind of fiery" is an understatement. In addition to Gracie's fire, readers witness her gradually evolving realization that the world is much more complex than she initially imagined it to be.  She begins to temper her original strong judgments. "I've realized I may have been completely wrong about my dad."  "I wondered about the word 'beast.' I wondered if sometimes, the way everything looks - who's the beast and who isn't - depends on where you're standing."  I love this statement of self-realization:  "Every year I realize how dumb I was the year before."

One of this book’s striking aspects is the comparisons I made to Homer’s The Odyssey.  The book’s 416 pages is itself a reading odyssey.  It requires an investment of time, attention to storyline, and a commitment to the characters. Reading Gracie's diary becomes a personal journey for the reader.

The travelogue aspect is certainly an integral part of this family's epic saga. We follow Gracie and her family on an extended journey to known and unknown places, several described in vivid detail. The mode of travel is symbolic. The family first travels via Winnebago, a name reflecting a Native American Tribe who excel in oral storytelling. Later they board the Weeping Alexa.  Alexa is a reference to Alexander the Great, the “protector”. These modes of transportation give added meaning to the family’s quest.

​The major characters read like the cast from a Greek drama.
We meet good guys, bad guys, both real and mythical. Sea monsters and mermaids inhabit the waters. Dragons and unicorns take flight through the skies.
Homer’s motifs take the form of the individuals the family encounters on their journey:  an oracle (Grandma), sirens (Luck City), Penelope’s suitors (Captain Bill).
Not since the Coen brothers’ O Brother, Where Art Thou? have I encountered such an imaginative homage to Homer’s epic classic.

Without question, the theme which resonated with me and continues to haunt my thinking is the concept of fate. This also reflects the Greek concept of The Fates: goddesses who controlled the life of every mortal from birth to death and watched that the fate assigned to every being proceeded without obstruction.

Stacy: I read quite a few books.  Especially during the summer when I am fortunate enough to be lakeside and poolside depending on the day. So it’s not everyday that a story really makes me sit up and notice it. In the first few pages of MDFTEOTW I found myself looking up from the pages and grinning.  Reading bits aloud.  And then tweeting this to my friend Barbara -


“@moonb2 thanks for the spotlight on this book, Barbara. I'm only on page 7 and I'm already delighted!”

By page 7 we know this: Cliffden Maine isn’t the Maine that we know in 2015. It is a Maine where there are the expected things like McDonald’s, Taco Bell and Wendy’s, schools and houses. But people in town are scuttering around because the dragons are on their way to hibernate and they’ve been quite destructive this year. Protagonist Gracie is out at her favorite spot (where she’s not supposed to be) on top of the hill overlooking town and writing in the journal her mom gave her for her 12th birthday.

Dragons aren’t the only odd things in the sky in Maine. There are also Dark Clouds. These are not the storm clouds we know that release the likes of lightning and rain. Rather they come to town and take away the people who are meant to die.  And now a Dark Cloud is settling right in Gracie’s yard.  Gracie is worried about her little brother Sam, who is often ill.  Complicating family matters is the fact that Gracie’s dad’s crackpot theories about the Extraordinary World have just ousted him from his job.  So when Gracie comes home one day to see a Winnebago in the front yard, she’s not too surprised that her dad means to pack up her mom, sister, brother and Gracie and head out of town.

Obviously this is a story about a journey, but it wasn’t until I had back channeled a bunch with Barbara that I could see the Odyssey’s tracks.  For me, the Lockwood family was running from crisis and desperately grasping at possibility.

Gracie truly makes this books shine. Whether it’s seeing her witchy grandmother’s house through her eyes, feeling her affections for Sam, seeing her longing to have a relationship with older sister Millie, or having those moments of embarrassment followed by yearning to believe in her father, if Gracie’s voice was less Gracie, the story wouldn’t work half as well.

The other high point for me was Anderson’s world building. The magical mixing with the mundane is presented so matter of fact, that readers simply have to buy it.  The journey has them landing in places like Luck City, Big Tex’s Circus, The Crow’s Nest, a broken down L.A. and even Cliffden itself and of the places contain different magic, but the magic follows the same rules.

And then there’s the idea of hope. Inextricable hope tangled up with fate. Which one rules the day?

What a pleasure it was to virtually read My Diary from the Edge of the World with Barbara across geography and time.  Clearly, both Barbara and I love this book, and though we both approached it differently, it worked for us.  I can’t wait to share this with a big cross section of readers. It works on so many levels that I am sure it will be a crowd pleaser!

A big note of thanks to Barbara Moon for co-blogging with me this time.  Barbara is a retired librarian who reads up a storm! Member of 2009-2011 Great Graphic Novels for Teens selection committee, 2012 Odyssey Award committee, 2014 Margaret A. Edwards Award committee. Currently servicing on the 2016 YALSA Excellence in Nonfiction Award committee. You can find Barbara blogging at Reading Style.
Posted by Stacy Dillon at 10:00 AM No comments: