The Garden of Eve 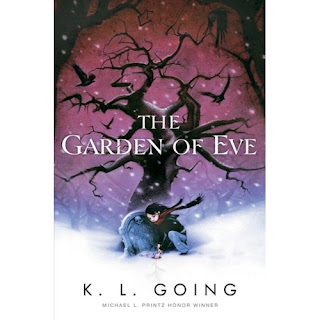 Evie is so angry with her father. They are in their truck, freezing cold, moving to a place that she has never seen, and her father is lost.
Her mother would know exactly where to go. She seemed to have a sense about her.
But she's not here. She's buried back home. And Evie cannot believe that her father wants to leave to move to a dead apple orchard.
When they finally get to Beaumont, they drive past a funeral. Evie is forced to remember the day of her mother's funeral. It was dark and gray, just like today. Evie notices someone who steps away from the crowd.
"The figure was a boy who looked to be about her own age, and he was
the palest boy Evie had ever seen. His skin was ghostly white against
the black of his coat and his pale hands were ungloved, making him
appear as if hands and face were all there was to him.
" pp. 16-17
Who is this boy, and why does Evie keep seeing him in the cemetery behind her house?
What follows is a heartbreaking story filled with magical realism and poignancy. Evie is on a quest of sorts to work through her own grief and salvage a relationship with her father. The town of Beaumont itself is broken as well. Can Evie's belief in magic help the people she hasn't yet met?
This is a very special book for deep and thoughtful readers. You have to be willing to delve into a fairytale of sorts, or it most likely will not work for you. Personally, I found this title staggering in many ways.
Posted by Stacy Dillon at 8:36 AM