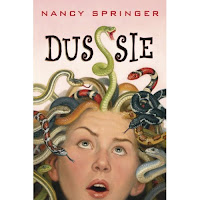 Quite a cover, yes? I picked this up since I have some mythology obsessed 4th graders in my hands this year.

Dussie, named after her aunt Medusa, awakes in the middle of the night to her first period. She is not pleased. But she manages to sort everything out and get back to sleep. Then when she wakes up in the morning, there is a new problem. Snakes. On her head. And yes, they're alive and no it's not a dream.

Now a few things make sense. She has always thought that her sculptor mom just dressed the part. Turbans and long flowy gowns are de rigeur. Now Dussie knows what lays beneath her mom's garb. Dussie cannot believe that her mother never prepared her for any of this! But her mom was hoping that since dad was mortal, Dussie would be different.

So how does a girl who is already worried about being pretty enough, figure out how to exist at school with a head full of snakes? What will Troy think when he sees her snakes? And even more, how can Dussie get these snakes off of her head?

A few life lessons are served up by Nancy Springer in Dussie regarding fitting in, family, and loyalty. Filled with a NYC cast of characters, reader's will delight in getting to know Dussie's snakes, and feeling her growing pains along with her.