Twice Upon A Marigold 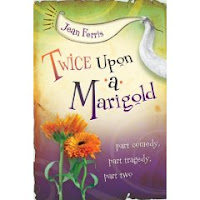 How happy was I when this gem showed up in the mail? Very happy, indeed.

When you think about it, much of Marigold and Christian's happiness was based on the fact that Olympia fell in the river but never came back. Well, guess what? She's back.

Turns out that Olympia has been cooling her heels down the river in Granolha, in the home of the mayor and his wife. The thing of it is, Olympia cannot remember who she is. She has decided that her name is Angelica, and sweet Angelica in no way resembles meany Olympia. She is a good listener, and treats her friends well. All good things must end, however, and after about a year's time, Olympia remembers who she is and resurfaces in all her glory.

Her aim? To get back to Beaurivage and set her plan back in motion. She just knows that her husband King Swithbert must have messed things up by now. Soon she is ordering the people of Granolha to do her bidding, rig her up a carriage, and get her home. She brings Lazy Susan along for the ride to act as her maid. (She is still resenting her sister Beauty's castle life and wants some for herself!).

What follows is a fabulous sequel to Once Upon A Marigold that will simply delight fans. Many characters are the same, but developed more deeply. And the new characters like Mr. Lucasa are such fun! Filled with cheesy jokes, wordplay, and slapstick, this tale of friendship, family and loyalty will warm even the coldest hearts.
Posted by Stacy Dillon at 4:42 AM

Wow, I never knew there was a sequel to Once upon a Marigold. It is one of my favorite books, and I recommend to all middle school relunctant readers! I will definetly have to read the sequel!

Isn't the first one great, Tasha! The second one is just as good, if not better! Thanks for stopping by, and good luck with your blog!

AH! I'm so excited! I just LOVE the first book and I was hoping for a sequel! I am so first in line to get this book!

Rayne I also am so excited I really hoped there was a sequel and me dream came true!TTYL!

what is margilod's father's middle name

What a great first book! Now there is a second! I love books like these. Anybody know any other books like this one filled with potions, magic, spells, dragons, fairy's, dimensions, and love? Let me know, they are my favorite!

This is a great book! I love it! There's some unexpected twists in this book. This is a fantasy book, so if you need a fantasy book for a book report, here is the best choice!

ah! I was so shocked that i didn't know about the sequel then i did a bit of research and found that Jean Ferris is currently writing Thrice Upon A Marigold! omg i'm going to read these even though its past my tween ages haha i still don't mind ^^