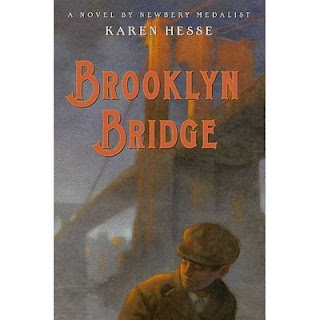 Last week I was lucky enough to attend a preview at Feiwel and Friends in the lovely Flat Iron Building. Many interesting titles were discussed, but the one I simply couldn't wait to read was Brooklyn Bridge, by Karen Hesse.

It's the summer of 1903 and Joseph is sick of bears. Ever since his mom created two toy bears in response to President Roosevelt's refusal to shoot a young bear on a hunting expedition, Joseph has been living and breathing bears. The family candy shop has turned into a bear making shop, and bear parts are all over the apartment. His parents are so busy trying to keep up with demand that Joseph's dream of getting to Coney Island seems like it will never happen.

Joseph's family are immigrants from Russia. First came his Aunt Golda (or the Queen as Joseph and his sister liked to call her) who saved all of her money to bring her siblings over, including Joseph's Papa, and his two other aunts (Aunt Beast and Aunt Mouse accordingly). His aunts stayed in Manhattan's Lower East Side, while the only home Joseph can remember is Brooklyn. Joseph knows that he is lucky...he really does. He knows other kids who don't want to go home because their parents yell, and hit, they don't have enough to eat, or they are falling over the many people crammed into their apartments. Joseph doesn't have to worry about any of these things. Still, he misses how life used to be with the candy shop, and how he used to be just one of the guys.

At least he is not one of the bridge kids. The ones that congregate there every night to try to get some sleep and stay out of harm's way. Some have nowhere else to go, others have run away from horrific situations. These kids watch out for each other, share whatever they have, and simply try to survive another day.

Hesse has penned an intriguing piece of historical fiction with a dash of magical realism as well. Who is the ghost that haunts the children under the bridge, and how can he possibly be related to Joseph's family?

The chapters about Joseph's family are interspersed with chapters telling the tales of the children living under the bridge. I am curious about the degree of fiction of these children's tales. Some are so horrific that I think they must have been recorded in a work house diary. It is amazing to think about NYC back at the turn of the century. The class divide is explored in subtle and not-so-subtle ways. The children who are cast aside are struggling every day to survive, and Joseph's family is making it, but suffering the consequence of not quite fitting in with the folks on the block like they used to.

I also love the amount of historical detail that Hesse managed to put into the book so seemingly effortlessly, that readers simply absorb them without feeling like it's work. The comments from newspapers of the day describing Coney Island are so interesting, and left me wanting to read more about the amusement parks (especially with the condo-ization of the area set to begin very soon).

Lyrical and haunting, Brooklyn Bridge is one of those books that stays with the reader. You will find yourself revisiting the characters and the situations time and time again.
Posted by Stacy Dillon at 7:01 PM