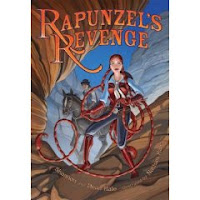 Rapunzel is tired of staying behind Mother Gothel's walls. Of course, there is enough to eat, some kind guards to play with, and a bit of exploring to do, but Rapunzel is still drawn to the wall. She thinks that if she can just look over it, she might make sense not only of her world, but of the strange dreams that she keeps having.

One day Rapunzel does get to the top of the wall and she can hardly believe what she sees. Beyond Mother Gothel's lush garden lies a virtual wasteland. Mines are dug out of the earth, and smoke stacks dot the horizon. Everything looks grey. Rapunzel also comes face to face with some of the workers from the mine camps. And one of them looks familiar...like the woman in Rapunzel's dreams. It is her birth mother. Before she knows it, the guards have pulled Rapunzel away from her mother once more.

When Rapunzel does not bow to Mother Gothel's wishes, and calls her a liar, Mother Gothel has her henchman Brute take her away into the forest where she is housed, not in a tower, but in a tree. Mother Gothel's growth magic allows Rapunzel food, but a side effect is that Rapunzel's nails and hair keep growing at an alarming rate. Each year, Mother Gothel returns to see if Rapunzel has repented, and every year Rapunzel refuses. Before long, Rapunzel finds a way to escape, and must navigate a land filled with desperation in order to find her birth mother and save her from the mines.

A quest to rival the best of them is penned by Shannon and Dean Hale. Sidekicks, villains, kidnappers, and giant sea serpents fill these brightly illustrated pages. This is a fun read, that will appeal equally to girls and boys. A fractured fairytale that goes deeper, Rapunzel's Revenge is a must for graphic novel readers.
Posted by Stacy Dillon at 1:49 PM

As you say you love the meme, I hope you don't mind but I've tagged you for one. You can see here: http://juxtabook.typepad.com/books/2008/06/tagged-again--.html Please don't feel obliged to join in.