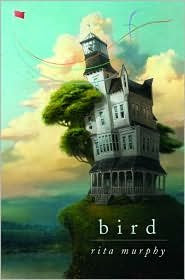 Hands down, the most fetching cover of the year. Look at this house. Absolutely beautiful. This is kind of the house of my dreams, and the minute that I saw the cover I yearned to live inside.

Until I read the book.

Miranda is a little girl who often gets caught by the wind. She is diminutive in size, and can easily wind up tossed about like a kite without a string. One day she is taken by the wind and lands in some brambles where she is discovered by Wysteria's hounds. Wysteria Barrows is the mistress of this house which is called Bourne Manor. Wysteria takes Miranda in, and sets her to work mending the fishing nets that pay the bills. Wysteria is a bit odd, but Miranda is thankful to have a home. So she overlooks the fact that Wysteria locks her in her room every night and makes her wear heavy iron boots so that the wind no longer takes her.

But Miranda is a child, after all, and she is curious. Over time, she discovers the entry to Wysteria's late husband's study. He was a sea captain, and among all of the expected treasures in the study, Miranda finds a secret room that is filled with kites. Miranda is soon up on the widow's walk flying the kites unbeknownst to Wysteria. When her beloved kite is stolen by the wind and found by a young boy named Farley, Miranda feels a stirring in her soul that she cannot name.

Soon, Miranda finds herself on her own, and is discovering the secrets of the Manor. Chilling secrets. Should she stay with Wysteria who has helped her all of this time, or should she escape and see where her future takes her?

Now, I should preface this by saying that I am very susceptible to books about houses that seem somewhat possessed. I went and read Amityville Horror at the tender age of 9 (which I DON'T recommend!!!) so houses with personalities scare me more than your average reader. I do not want to imply that this is a horror story, but there are ghost story elements to it. Along with a fairytale like atmosphere complete with an otherworldly lead character, and an Irish boy filled with fairy lore.

Rita Murphy has written an interesting and ethereal story about friendship, family, loyalty and first love. It is an odd story. There is no other way to say it. But it is magical and compelling as well. Bird is for the older tween who is a deep reader and will not be put off by something completely different.
Posted by Stacy Dillon at 4:53 PM

I completely agree about the cover. Beautiful...and the story sounds great too. Have you seen the cover for My One Hundred Adventures by Polly Horvath. I think it rivals.

Hi Casey: I have seen Horvath's book...one of my favs of the year. I have a review if you scroll doooowwwwwnnnn! Thanks for stopping by!

I heartily agree about the cover of this book. I love the cover. I bought the book because it looked beautiful, and the description of the story sounded good. Then I started reading it- it was not bad, but like you said, it was odd.

You know, as I was typing I was thinking that I should check if you'd reviewed it already...but I didn't. Woops! :)