Diary of a Wimpy Kid The Last Straw 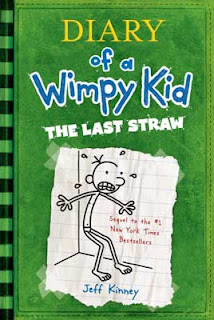 When I ripped open the envelope and reached inside, I only ended up pulling out about a centimeter of the book when a fourth grader exclaimed, "Oooo...Stacy! That's Wimpy Kid 3! Can I have it?" I bargained with him to let me take it home that night and then catalogue it the next day since I knew I'd never get a chance to see it again, until it hopefully gets returned in June!

It's New Years, and Greg thinks that since he is so perfect, he should simply help others keep their own resolutions. Mom is trying to go the gym, Dad is giving up junk food, and Manny is supposedly done with the pacifier. As you can imagine, none of these efforts are too successful, and the family is a little tired of Greg telling them that they are messing up.

From there, readers are back into the daily life of Greg. He's trying to look cool in school, solve the mystery of his teacher's missing dictionary, figure out who is stealing his lunchtime snacks, plan how to call Holly Hills on the telephone, and somehow avoid a summer at Spag Union military academy.

Kinney's trademark style and humour will have readers of all ages laughing aloud at Greg's predicaments. The artwork is priceless (with my favourite being the newspaper clipping of Greg during his soccer game). I think that this is the stand out title in the series so far. One of my students pointed out that there aren't as many cartoons by Greg in this book. I don't have the other two books with me to compare, but even if this is so, the book did not feel like it was lacking. The wide appeal of this book is interesting as well. Younger readers like the idea of the cartoons in the book, and middle schoolers solidly identify with Greg and his family.

This one's on my list! I'm heading to the library today and see if they have it yet!