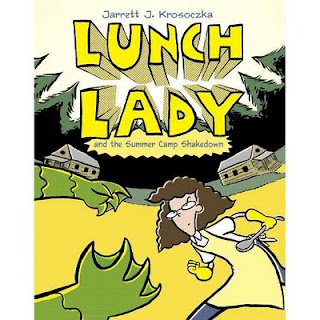 School's out for Dee, Hector and Terrence and now they're off to summer camp. While they're sure that the ban on video games, computers and all things electronic will make for a boring summer, they couldn't be more wrong.

Our campers are super surprised to see Lunch Lady and Betty when they get to Camp Fun Times, but don't have any time to discuss it as the boys and girls are separated into gender based cabins. Quickly the talk in the girl's cabin turns to who is the cutest counselor and friendship bracelets, while the boy's cabin is trying to figure out who dealt it (if you know what I mean).

The first night is the time for the opening campfire, where counselor Scott tells the campers about the legend of the terrible swamp monster! After the ghost story, hunky Ben plays his guitar and has the girls swooning in no time! But the blissed out night is about to be ruined when Ben is attacked by the swamp monster and his guitar is broken!

What is going on? Is this a case of a jealous counselor? Is there a power struggle going on between the camp director and his assistant? Is there really a mutant swamp monster on the loose?

With Lunch Lady and Betty along with the kids on the case, it's sure to be cracked quickly. Resplendent with kitchen gadget spy tools, kids sneaking out after curfew, dizzy pottery teachers, and bug juice, this latest installment of Lunch Lady should be in every kid's suitcase as they head off to camp.

A fun addition to the series that will be on shelves May, 2010!
Posted by Stacy Dillon at 8:51 AM

I've really got to read these books! Thanks for your post.