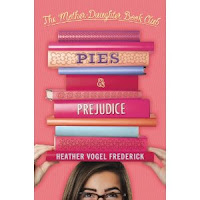 The girls are back, and this time they are tackling some Austen as well as a cultural exchange of sorts!

The girls are 15 now and everyone seems to know what they want to do with their lives except for Jess. She’s throwing herself into her life at the Academy, and things are better since she no longer has to room with snotty Savannah (who is turning out not to be so snotty after all). She’s singing in the MadriGals and now her mom has her enrolled in a cake decorating class. It’s not really her thing, but she feels like she has to do it since she doesn’t really get to see her family as much as she used to.

Cassidy is still into hockey but her nice surprise is that she’s bonding with Stanley more than ever. Who knew her dorky step-dad would be such a sports nut and go to bat for Cassidy with her mom so that she can play with the elite girl’s team in the area? He’s even getting up at the crack of dawn to drive her to practice.

Megan’s passion for fashion is going strong, and she’s adding an anonymous blog to her resume. “Fashionista Jane” is a helpful yet snarky commentator on the world of fashion at her school. Not only is she showing readers how to rework their wardrobes, she also has a fashion faux pas section which is super popular. Too bad it bruises a few egos along the way.

The biggest change is in store for Emma and her family who up and leave for England for a year. At first Emma and Darcy aren’t thrilled with their parents’ announcement. They only got 2 weeks notice! But the allure of England and Jane Austen territory in particular is thrilling for Emma. Yes, she’ll miss Stewart, but it is only for a year.

Vogel Frederick has written another installment that is fun filled yet more grown up than the previous titles. She has managed to keep the girls innocent yet believable, and bringing the Hawthornes to England was a great way to introduce new characters and switch the focus a bit. Romances abound and will keep readers titillated without resorting to choosing “teams”. I don’t want to give too many plot points away, but suffice it to say that the laughter that came with the reading was familiar, while the tears were not. Fans will be delighted, and new readers will be able to jump right in.
Posted by Stacy Dillon at 10:38 AM

I love these but cannot get students to read them. I'll have to think about whether I can justify buying this. The covers are so pretty.

Keep trying! I find they're more successful with the tween rather than teen. Our mothers have picked them up for bookclubs with their daughters as well.

We just started reading this one, and are watching the A&E P&P miniseries together.

My daughter is truly excited each time a new one comes out, and she usually likes more action and fantasy. I agree with Stacy that if you can get a mother interested, they might read them together.

I just found your blog. You have some interesting books here. I plan to check them out. I am not familiar with this author (Fredrick). I am going to check it out for my 13 year old. Thanks for the suggestion.

I want you to know I have been reading the first book in this series. My daughter is too, and she is a relunctant reader. We are both enjoying it. Thanks.