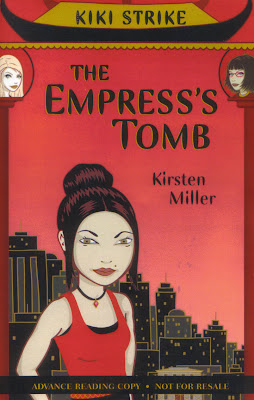 I have to thank Karyn for picking this up for me at BEA. I couldn't believe it when I realized that not only had I missed seeing Kirsten Miller in person, but I totally missed picking up the ARC as well. Ugh.

So. Kiki is back. All of the Irregulars are now 14 years old (except for Iris, of course, who is 11). We start the story with a bunch of animal releases in NYC and giant squirrel murals painted around town. The press immediately blames Kiki, but Annanka knows better...Kiki can't even draw!

The main meat of the story is Oona's this time. Oona has been keeping a secret from the other Irregulars. She's not an orphan like they all had thought. Oona knows her dad. He's none other than Lester Liu - crime boss and smuggler. Lester was never interested in having a daughter so he left Oona with some women from one of his sweatshops. All of a sudden, Lester is taking an interest in Oona...and her band of friends. He says he's gone legit. He says that he wants to be a philanthropist. He says he wants Oona in his life. And Daddy's also sending gifts...in the form of diamonds and designer clothes. It seems that he might just know his daughter afterall.

What do the other girls think of Oona's budding relationship with her dad? Can you say "traitor"?

Another adventure filled with twists and turns, NYC geography and history, wonky families, and girl power! The Irregulars are older now, and the problems get more sophisticated as well. To be honest, this was a bit of a slow starter for me. I was tripping over some language at the beginning. But once the story got into full swing, I was hooked once more! (Stayed up til 3:00 a.m. just to finish!)

I'm looking forward to the next installment! And I think these books would make an EXCELLENT movie. Can you imagine?
Posted by Stacy Dillon at 1:13 PM

Just finished Kiki Strike: The Shadow City last night and ran across this post looking for links. I'm SO jealous! I linked over (http://paradisefound.homeschooljournal.net/)

I think this is the first review of the Empress that I've seen! I'm thrilled you liked it.

Thanks for stopping by, Kirsten. I do love Kiki! You have me wandering around the Village looking for shadow city locales! I love how the girls are growing up.

i just read inside the shadow city
and i like how each chapter has a small insert on the themes (such as spotting a fake diamond, beating up someone, etc.)

I looooooooooove Kiki! She is my heroine! Sometimes I feel like I should join the Irregulars! Wouldnt you just die to she the shadow city!

ichigo: kiki is the best! i think it needs to be a movie for sure!

I LOVE this book! I'm doing a project on it! :) ~Sammy Bennett