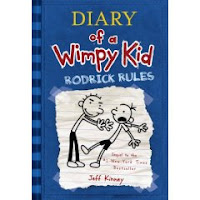 When this FINALLY got checked in at the library last week, I eagerly snatched it up as I knew I wouldn't see it until about May.

"I guess Mom was pretty proud of herself for making me write in that journal last year, because now she went and bought me another." (p.1) And so it begins.

Greg is back, and we start at the beginning of another school year. As with the first installment, each journal entry describes a day in the life of a pretty hilarious family. From Greg's having to wear his brother's hand-me-down Speedo to swim team, to making Chirag the invisible boy, Jeff Kinney certainly has his finger on the pulse of Middle School existence.

So why "Rodrick Rules"? Well, it turns out that Rodrick knows something about Greg that Greg really doesn't want to get out. So now more than ever, Rodrick is in charge. Greg cannot tell on anything! Not even the party when his folks are out of town.

While there is nothing in this second installment that rivals the "cheese touch", it is a read that kid's cannot put down. As I said before, it is constantly checked out of my school library, and my fourth graders have even nominated the first title for their 4th grade book election this year. Perfect for reluctant and avid readers alike.
Posted by Stacy Dillon at 9:03 AM

Question for you on these Wimpy Kid books. I was told that the content was more appropriate for the older end of the elementary grades - 4th and over. I have a second grader who reads at a 4th grade level. Is the content inappropriate for her?

Thanks for the great reviews!

Hi Susan: I think that the age range of 4th and above is pretty spot on. Greg is in middle school, and though the text is pretty easy and the illustrations are amusing, Greg is dealing with middle school things....girls, bullying, no-parent-parties. Even though much of the content would be a bit veiled to younger readers, I would put it in the hands of 3rd graders toward the end of the school year, 4th graders, 5th graders and 6th graders. Great question, though. It's something that we struggle with all of the time. How about some animal fantasy for your young reader?

I haven't yet read this series, but I would very much like to. I've heard a lot of good about it.

It's pretty fun, Angela. And a quick read to boot!