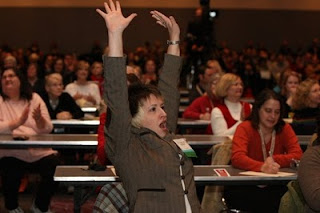 There is nothing quite as exciting as attending the ALA’s Youth Media Awards. When I woke up this morning, I considered staying in bed an hour longer, and then heading down to the hotel lobby to watch it on the webcast. Thankfully, my roommate Karyn rallied me, and we made our way across Boston to the BCEC and got in line to enter into the ballroom.

There’s always a buzz in the room, and I found myself getting nervous about the lists. I decided not to watch my twitter feed the whole time, but enough folks around me had their phones out that I could look over a shoulder and read the comments from around the country as the awards were announced.

In case you haven’t heard, you can follow this link and find the official press release from ALA.

On the tween-y front, this year’s Newbery lists does not disappoint. Personally, I was quite happy to see The Evolution of Calpurnia Tate on the Honor List, and while seeing When You Reach Me wasn’t too much of a surprise when announced, it’s a very fine winner.

So congratulations to Rebecca Stead, Philip Hoose, Jacqueline Kelly, Grace Lin, and Rodman Philbrick!
Posted by Stacy Dillon at 5:17 AM

Oh, it definitely would have been nice to be there in person, but watching the webcast from the comfort of my bed while Tweeting with my closest bloggity friends is a close second. :)

The 5 a.m. wake up call, definitely makes the bed/tweet watching appealing. My moment of a lifetime, was sitting next to Barry Goldblatt when the Printz was announced. (Libba's husband)

Oh--I wish I had realized that you were there; we could have said hello. I, too, thought being in the room for the YMA announcements was incredibly exciting. I WAS following on twitter as well, and watching some of the honored authors respond was way cool :) I was surprised that only two Caldecott honors were named, but other than that I thought there were few surprises. And I was SO happy that the (Mostly) True Adventures of Homer P. Figg got an honor; that's been my pet book of 2009.