The Incorrigible Children of Ashton Place 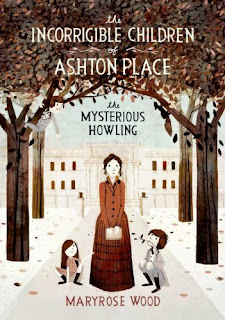 Penelope Lumley has just graduated from Swanburne Academy for Poor Bright Females, where she was dropped off when she was four years old. At the Academy she was a bright student, fond of quoting the sayings of Miss Agatha Swanburne, and is now en route to interview for a job as a governess at Ashton Place. Her head mistress Miss Charlotte Mortimer penned Penny a glowing recommendation, and Penny is hoping for the best.

When she meets Lady Constance, Penny is a bit surprised when she ends up asking the lady of the house questions rather than the other way around. And for some reason Lady Constance really doesn’t want to talk about the children. In fact, she states that children are not very “interesting” to discuss.

But the real surprise comes when Penny does meet the children. Raggedy and kept wrapped in blankets in the barn, the three children howl away and act like animals. Penny soon learns that Lord Ashton found the children in his woods while out hunting, and instead of sending the children to a work house or an orphanage, he applied his “finders keepers” philosophy and decided to advertise for a governess instead.

Penny is soon knee deep in the task of re-education Alexander, Beowulf, and Cassiopeia (names chosen by the master of the house). She is sure that poetry, Latin and some etiquette will change their lives. The children and their governess are mostly left to themselves, until Lady Constance lets them know that she is planning her first Christmas fete as the lady of the house and that the children must be presentable by that time.

Penny is sure that she can have the children ready, but it seems that someone doesn’t want her to succeed. Who could it be?

Maryrose Wood has written an incredibly smart and engaging start to a series that has left me wanting more. The pacing is perfect, the voice of the narrator is polished and so much fun! All of the pearls of wisdom from Agatha Swanburne will have readers thinking, and no doubt quoting as well. My friends know that I usually bemoan the fact that so many titles develop into series…I hanker for the stand alone. The Incorrigible Children of Ashton Place, however, does it right. The characters are interesting, the setting is clear and the writing is strong. Simply put, I cannot wait for the next installment!
Posted by Stacy Dillon at 9:16 AM

Oh, this sounds wonderful. Definitely a promising start to what looks like a very interesting series. (I, too, love a good stand-alone, but series books did so much to foster my love of reading as a child...)

I've seen this one around several places. I think it looks really cute. The cover reminds me of The Fear School (at least I think that's what its called)

Everyone is raving about this book! I need to put it in my TBR stack.