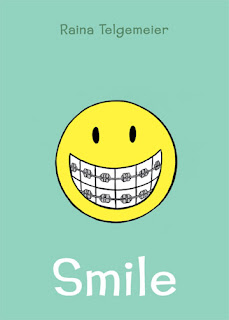 I love working with colleagues who love books as much as I do! Without them, I might not have gotten my hands on a little gem of a autobiographical graphic novel like Smile, by Raina Telgemier. So thanks to Jesse and Jen!

Raina is coming home from Girl Scouts one night and is running to her front door with her friends Kelli and Melissa when she trips and goes down hard! She lands on her face, and when she comes up, her front two teeth are no longer where they should be. They find one on the sidewalk, but the other is not to be found (it will be discovered later jammed up into her gums). One emergency dentist office later, a tooth is replace, the other pulled back down, Raina has a cast on her teeth and is hoping for the best.

The treatment doesn’t work out quite as planned, and Raina is left with front teeth that don’t fit her mouth, and braces on top of that!

But this story isn’t all about Raina’s smile problems. Readers watch her go through growing pains including a first crush on a 6th grader when she’s in 7th grade, and all of the grief that her “friends” give her about it -- forays into the scary world of the school dance, and the realization that true friends accept a person for who she is.

Tweens will eat up this real life story of growing up. Readers will be able to relate to the aches and pains of middle school, even if they’ve never sat in an orthodontist’s chair. If Raina’s art seems familiar to readers it’s most likely because she is behind the graphic novel adaptations of The Babysitter’s Club. Smile will appeal to the reader’s of that series, but will be enjoyed by a whole new audience as well.
Posted by Stacy Dillon at 5:18 PM