Poop Happened! A History of the World From the Bottom Up 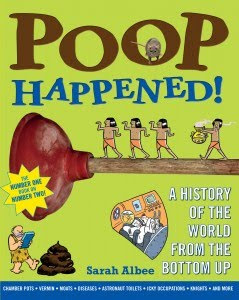 With a title like this, you know that this book will have shelf appeal! But will the readers keep with it after it’s on the table? Did the Romans poop in public?!

In this fast and gross history, readers will learn all sorts of interesting bits about the history of our bathroom habits. The first two chapters “Poop Matters” and “Bad Plumbing, Bad News” set the scene giving readers a sense of the sociology of waste, and making them hone their minds on to the idea the how and the why of poop and fashion and poop and class. Set at a furious pace, author Sarah Albee then gets to the history starting with the Romans and ending with disposable diapers and fitting all sorts of fascinating facts in between.

For example, if someone asked you who invented the toilet, chances are you would say Thomas Crapper. Guess what? You’d be wrong. In fact, in 1596 Sir John Harington invented a flush toilet for himself and Queen Elizabeth (p.132). It’s just too bad there weren’t any sewers. Thomas Crapper doesn’t come along until 1884! But go back 5000 years further and it turns out that the Harrapan civilization (in what is now Pakistan) built sewers, and private bathhouses that drained into covered sewers.

It’s not all about toilets either. Albee explores the frightful diseases that caused havok among cities like London, New York and Paris. Cholera, dysentery, escherichia coli (E. coli), polio, schistosomiasis and typhoid are all waste related and all took out large portions of the human population (and unfortunately continue to do so in poorer and developing nations).

There are highlighted boxes throughout the book that outline topics such as waste related jobs (Fullers, Paleoscatologists, Tanners, Gongfermors, Barber Surgeons, Knight’s Squires, Delousers, Chair Men), “Hygiene Heroes” (Florence Nightengales, Ambroise Pavé, Leonardo da Vinci, Sir John Harington, Benjamin Franklin, Dr. John Snow) and “Too Much Information” (filled with some fun, gross-out facts that are somehow related to poop). There is also an interesting look at fashion and the bathroom (for example, how do you go while wearing a hoop skirt?).

Overall, this is a fun and gross book that has many points of entry. It would make a fabulous book-talk or browsing book and has enough information to help out on projects dealing with diseases, fashion, ancient civilizations, tenement life, royalty, and even colonial times.
Posted by Stacy Dillon at 9:41 AM

That's hilarious. Kids book or not, this is what you buy a 30-something man who still finds poop far too amusing. Bathroom reader, perhaps?

Thanks, Stacy. I'm SO happy you like my book!
Sarah Albee