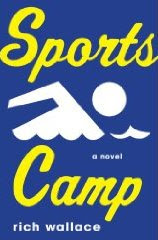 Eleven-year-old Riley Liston isn’t exactly a jock. Don’t get me wrong, he is good at some sports. Especially the kinds that involve distance and endurance like cross-country and swimming, but he’s not standard fare for sport’s camp.

Camp Olympia turns out not to be quite like the brochure. The “arena” was nothing more than an old barn with a cement floor and the “stadium” a plain old field with the chain link backstop. “The Camp Olympia Institute for Sports and Nutrition” was a smoky, greasy cafeteria that serves food that the kids don’t even want to eat! (They stock up on snacks at the Trading Post to survive.)

But Riley figures out a way to get by. Since all of the campers have to participate in the team sports, Riley simply tries not to screw up. All during the two weeks of camp the bunks are earning points to try to win the Big Joe Trophy, and Riley doesn’t want to be the camper who costs Cabin 3 the cup.

Rich Wallace has written a summer camp story that will snare sports enthusiasts and non-sports enthusiasts as well. The camp setting is familiar to many kids, and if not, readers will take their first journey along side of Riley. Since the sports in the camp are varied, readers will get a glimpse of softball, basket ball, water polo, cross country, and even hot dog eating contests. Readers get to see Riley’s confidence grow as the days go by. All of the trappings of summer camp are in the mix as well, including ghost stories, a famously huge and famously unseen resident snapping turtle, and cabin trashing shenanigans.

Pack this in the bag of a camp going guy you know this summer!
Posted by Stacy Dillon at 9:42 AM