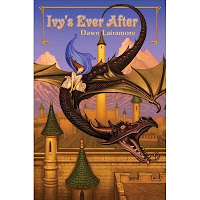 Ivy has never fit the mould of a typical princess. Since her mother passed away during Ivy’s birth, the King has not been much for putting on airs and standing by tradition. Ardendale was never a flashy kingdom anyway, made up mostly of peasants and farmers. The one standing tradition that is left is that of the tower.

Ivy learned about the tower by accident. A couple of her friends (the daughters of servants) told her that she was to be locked away in a tower at age 14 and guarded by a dragon. Whichever prince could slay the dragon would not only be Ivy’s betrothed, but also the new ruler of Ardendale.

Ivy cannot believe that her father, befuddled as he is, would keep this important information from her, but when she confronts him, she learns not only that it’s true, but that the King has every intention of standing by this tradition that is part of the Dragon Treaty.

Not long before Ivy’s 14th birthday, a strange ship made of bone with hide for sails, enters into the harbour, carrying Prince Romil of far off Galacia. The Prince claims that he is in Ardendale to slay the dragon that is to guard Ivy’s tower and then to take on leadership of the land. But Ivy thinks there is more to Romil than meets the eye. Why would someone who complains so bitterly about the backwater state of Ardendale want to rule here?

Just before Ivy is to enter the tower, she learns of Romil’s overarching plans, but due to her wild ways of the past, nobody believes her. There is no way she can stay in the tower until she must marry Romil. When Ivy unexpectedly is rescued by an unlikely source, she is in for the adventure of her life.

What follows is a quest that will keep readers on edge over mountain tops, through swamps, into the fairy realm and the dragon’s den. Ivy is filled with pluck, and is desperate to prove that while she may not be the most refined princess, she is indeed brave and true.

Dawn Lairamore has written a fun-filled fantasy for the younger end of the tween set. Filled with trappings of dragons, treasures, fairies and trolls, readers will delight in getting their feet wet in some wizard free fair for a change. At times light and and other times filled with peril, Ivy’s Ever After is a satisfying tale that honors family, friendship and the idea of the greater good.
Posted by Stacy Dillon at 6:31 PM

after reading this post; i requested the book from the Library and will be finishing it today (at part 3)..

was reminiscent of M.M. Kay's 'the ordinary princess' at the beginning (which is a good thing) but has since taken off on its own.

am enjoying the read, thanks for the recommendation. when my 10 yr-old fairytale reading daughter gets home from camp, i know she will enjoy the read also.