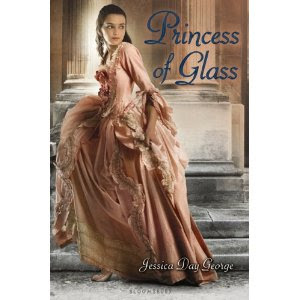 Poppy is just getting used to having her own room.  She is staying with her late mother’s cousin Lady Margaret Seadown and her family in Breton.  It has not been so long since Poppy and her 11 sisters were cursed to dance every night Under Stone, and Poppy is still suffering some lasting effects of that dark magic.  The primary one being that under no circumstances does Poppy want to dance again. But family curses aren’t exactly the type of thing that people in Society talk about, and Lady Margaret wants Poppy to attend the upcoming ball hosted by the Thwaite family.  After all, this shuffling around of princes and princess was meant to end with several marriages and thus the uniting of different areas, and the way to meet suitors is by attending party after party.  As awkward as this would be (what with several princes having died trying to rescue Poppy and her sisters – including the sons of families who would be attending these parties), Poppy acquiesces to her hostesses wishes, and is soon attending the fete at the Thwaite’s mansion. Poppy creates much intrigue when she refuses to dance, but ends up doing quite well in the card salon of the gentlemen!
Christian is one of the princes who has been sent to Breton on a marriage mission.  Unlike Poppy, however, he is welcomed into Tuckington Palace.  After his host Prince George gives him a tedious tour of the palace, Christian is shown to his room just as a rather frazzled maid was trying to lay the fire.  She is jumpy and covered in soot, and receives a scolding from Prince George for not laying the fire earlier.  Christian feels a bit like a fish out of water here.  His own court is much more casual, and they certainly treat their servants more kindly.
Ellen Parker, meanwhile, is not too happy with her existence as a maid.  This isn’t her life…at least it shouldn’t be.  She had once been Eleanora Park-Whittington, meant to be served, not a servant.  But that was a long time ago, before her father had lost everything.  The Seadowns are not the first family that Ellen has worked for, but they might be her last.  She is abysmal as a maid; prone to dropping, spilling, smashing and messing things up with the soot that she seems to trail around.
These three didn’t end up together in Breton by accident.  There is magic afoot, which becomes apparent when a spectacular stranger starts attending the balls of the season.  This beautiful woman who arrives unescorted in an extraordinary carriage calling herself Lady Ella, seems to throw everyone into a thrall.  She is dressed exquisitely right down to her astounding shoes that seem to be made of glass!  All of the men in attendance are soon clamoring to dance with her, but she only has eyes for Prince Christian.  Only Poppy, who has been so intimate with magic, seems to understand that something dark is at play.
Jessica Day George has written a beautiful blend of romance, mystery and re-imagined fairytale.  Ellen Parker certainly gives a new twist to the Cinderella character, and will make readers think about wishes and entitlement.  Princess of Glass is part of a series, but is easily read as a stand alone.  I had not read Princess of the Midnight Ball that features Poppy and her sisters, and I had no trouble jumping right into this title.  Filled with magic, both dark and light, as well as memorable settings and characters, Princess of Glass is sure to have readers up late into the night, turning pages to find out what happens!
Posted by Stacy Dillon at 11:03 AM

I liked your summary of this book. I just recently (two days ago) finished reading it and loved it as much as Princess of the Midnight Ball and all of Jessica Day Georges books. I also liked Shannon Hales' books with similar writing styles. It's fun to read what other people have to say about books I enjoyed reading :)