The Humming Room, by Ellen Potter 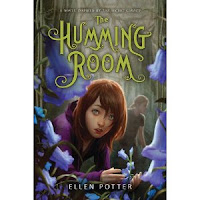 Roo is a crafty kind of girl.  When she doesn't want to be found, she heads beneath her father's trailer where she can look at her treasures and put her ear to the ground and listen to the earth.  It is here where readers are introduced to Roo, as her neighbor Mrs. Quick is talking to the police about what happened above her.  The officer tells Mrs. Quick that Roo has an uncle (a rich one) who is willing to take her in. This is news to Roo, as she has never been told about any family...it's always been Roo, her father and a various string of girlfriends.

After a short stint in foster care, Roo is gathered up by her Uncle's assistant Ms. Valentine.  They travel to the island of Cough Rock on the St. Lawrence where her uncle lives in the old St. Theresa's Children's Hospital.  Roo is not so happy with the boat ride as she has never learned to swim.  Once she arrives, she realizes that the water is the least of her worries.  Her uncle wants nothing to do with her, she is forbidden from entering the East Wing of the building, there are the unexplainable sounds, and before long she is under the eagle eye of her tutor Mrs. Wixton who loves to gossip about Roo's family.

But Roo is a wily one, and rules have never really applied to her, and she soon learns to evade Mrs. Wixton and uncover some of the secrets of Cough Rock.

Inspired by The Secret Garden, The Humming Room is a ghost story of sorts coupled with Roo's coming of age.  Ellen Potter has written a creepy story that ultimately has hope at its heart.
Posted by Stacy Dillon at 5:00 AM

so glad to see your post on The Humming Room. both the daughter(nearly 12) and I recently finished this one and enjoyed it immensely.