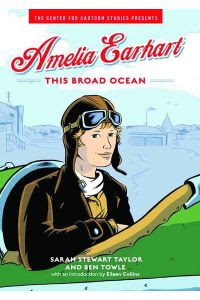 In this graphic novel style biographical look at Amelia Earhart, readers are treated to the marriage of fact and story. The story starts in a small Newfoundland town. Amelia Earhart, Bill Stultz, and Slim Gordon have arrived in the hopes to make Amelia the first woman to cross the Atlantic by air.

Grace, a girl in town who fancies herself a reporter and publishes her own paper, is shocked and intrigued by Amelia's goal. Grace takes to following Amelia around town, hoping for a scoop and some insight. Once attempt, after attempt to take off fail, many people lose interest in the flight...but not Grace! She actually gets a tête à tête with Earhart and has her questions answered - including why she wants to fly airplanes, how she was chosen for the Atlantic crossing, and what her husband thinks about her flying.

Readers see Grace grow up and follow her own dreams, apparently inspired by Amelia's successes.

The introduction by Eileen Collins (the first female pilot of a space shuttle) sets the tone. Readers are introduced to Earhart through the eyes of someone inspired by her, and Collins lays out the facts of Earhart's life. Ben Towle's illustrations are filled with emotion and give a real sense of time period. The tri-color panels (black, white and blue) instantly pull the reader in and are evocative not only of the triumph of the skies, but the tragedy of the seas. The panel discussions int he back matter deepen the factual content of Earhart's life through quotes, information on women pilots, as well as society in the 1920s and 30s.

Overall, this is a stunning and interesting look into the life and times of Amelia Earhart.
Posted by Stacy Dillon at 9:55 AM

Hey, didn't know about this one. Thanks.