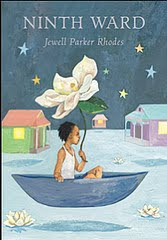 Ever since Lanesha’s mom died giving birth to her, she has lived with Mama Ya-Ya. Born inside a caul (a skin netting covering her face), with green eyes, Lanesha’s own uptown family is wary of her, and leaves her in the Ninth Ward in the care of Mama Ya-Ya. Mama Ya-Ya says, “Better you be an orphan, your family thinks. Better crazy Mama Ya-Ya raises you,” she says sucking air through her false teeth. “Fine. I’m old school. Don’t care nothin’ about folks who dishonor traditions as old as Africa. I’ll be your mother and grandmother both.” (pp. 2-3) Mama Ya-Ya has always made sure that Lanesha knows that she is loved.

Lanesha, like Mama Ya-Ya, has a gift of sight, and she’s been seeing ghosts since she was a baby. In fact, her own mother often sits with her big belly right on Mama Ya-Ya’s bed. But she never talks to Lanesha…not like Jermaine who ended up getting shot before middle school. Lanesha wonders why her mama doesn’t leave. What is she waiting for?

Mama Ya-Ya has also taught Lanesha to look for the signs that are all around her, and to use her senses to figure out what is coming. On Tuesday evening, Mama Ya-Ya says that she knows a storm is coming. Lanesha’s not too worried. They’ve had lots of storms before, and nobody is even talking about this one on TV.

By Wednesday, the news anchors are talking about the storm. Mama Ya-Ya tells Lanesha not to dawdle at school, and to get to the store to pick up the regular supplies: milk, bread, beans, water, and rice. At the breakfast table, Lanesha notices that Mama Ya-Ya doesn’t look herself. Her hair’s not combed, her teeth aren’t in, and she is obviously troubled. Turns out, she’s had a dream and she cannot figure out what it means.

By Saturday, the people of New Orleans are told to evacuate. But what are Lanesha and Mama Ya-Ya to do? They have no car, no people to speak of, and at 82 years old, Mama Ya-Ya has seen her share of storms.

Reading Ninth Ward knowing about Katrina and everything that happened in the Ninth Ward filled me with dread. I knew what was coming and I wondered how Jewell Parker Rhodes was going to write it. It’s not candy coated, and it’s not pretty, but the one thing that does survive the storm is hope. Lanesha finds her incredible strength as a friend, a daughter and a girl. Jewell Parker Rhodes’ writing is poetic, and readers get a real sense of the community that Lanesha is a part of. Yes she lives in poverty, but she has the bright spots of Mama Ya-Ya, her teacher Miss Johnson, and her neighbor TaShon.

Lanesha is a character who readers will not forget.
Posted by Stacy Dillon at 10:19 AM

I really want to read this. I
believe all of Jewell Parker Rhodes adult fiction is set in New Orleans.

I haven't read her before but someone I work with loves Jewell Parker Rhodes work.

Her favorite is Yellow Moon.

Oh! It's about time I stop by your blog. I see there's a lot I can learn here re: tween & teen books. I'm a middle school librarian and I need all the help I can get.
I'm glad I stopped by.
BTW you know me on Twitter. I'm InfodivaBronx.

I just heard this book shouted out on The Today Show. Even though I'm an adult, I want to read it!